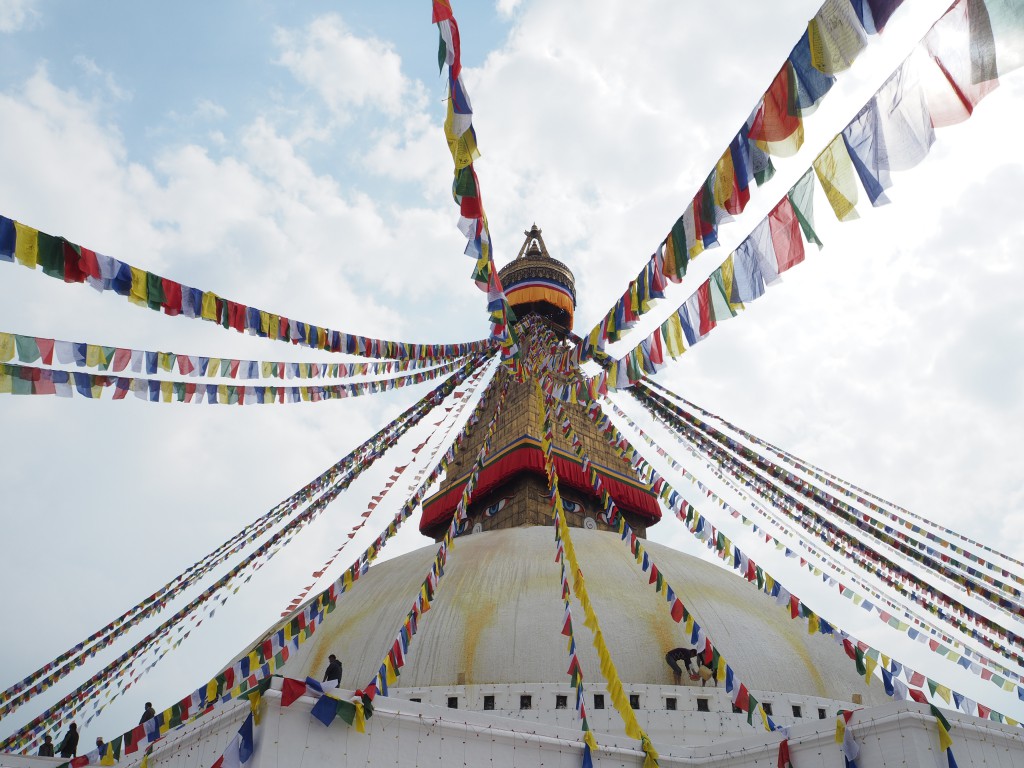 Bodhnath Stupa, in the Kathmandu Valley

WiFi has been sketchy to say the least in Nepal, probably not helped by the constant electricity outages! But finally I’ve got around to setting up a blog of our travels 🙂

So it all begins in Nepal. We arrived on the 11th February after a pretty grueling flight – we were both so exhausted after the first 7 hour flight only to board another 3.5 hour one from Oman – to the very dusty and bustling city of Kathmandu. As soon as we ventured out of the airport we were thrown in to tourist life in the city, with an airport pickup arranged by our hostel but several guys showing us the way to our vehicle and wanting money in exchange (luckily this was not representative of elsewhere in Nepal). When we arrived at about 5pm at Elbrus Home (our chosen hostel for our first stop in Kathmandu) we were shown to our room and pretty much immediately went to bed – we couldn’t bear to face the city, we were so tired.

The breakfasts at Elbrus were possibly the best thing about the hostel, and starting the days with scrambled eggs, mango juice, toast, bananas and ginger tea was great! We spent the first 3 days exploring Kathmandu Valley – covering the city on the first day, Patan on the second and Bodhnath and the monkey temple (Swayambhunath) on the third. We loved everything Kathmandu had to offer! We found the people were so friendly and welcoming, and although the city was completely ready and prepared for tourists, we didn’t find it overly touristy at all. We quickly found the constant cars and motorcycles joining us down the crazy weaving streets lined with shops of every kind completely normal and not unsafe even though the driving in Nepal is definitely a different art! A beep is used in a completely bizarre and constant way – to let people know you’re about to go around a corner, or that you’re going to overtake them, and as rush hour actually lasts 4 hours and happens twice a day, you can imagine what Kathmandu sounds like. We found it particularly difficult sometimes getting to sleep in the evenings, but I think that was mainly to do with our room in Elbrus being close to the road. 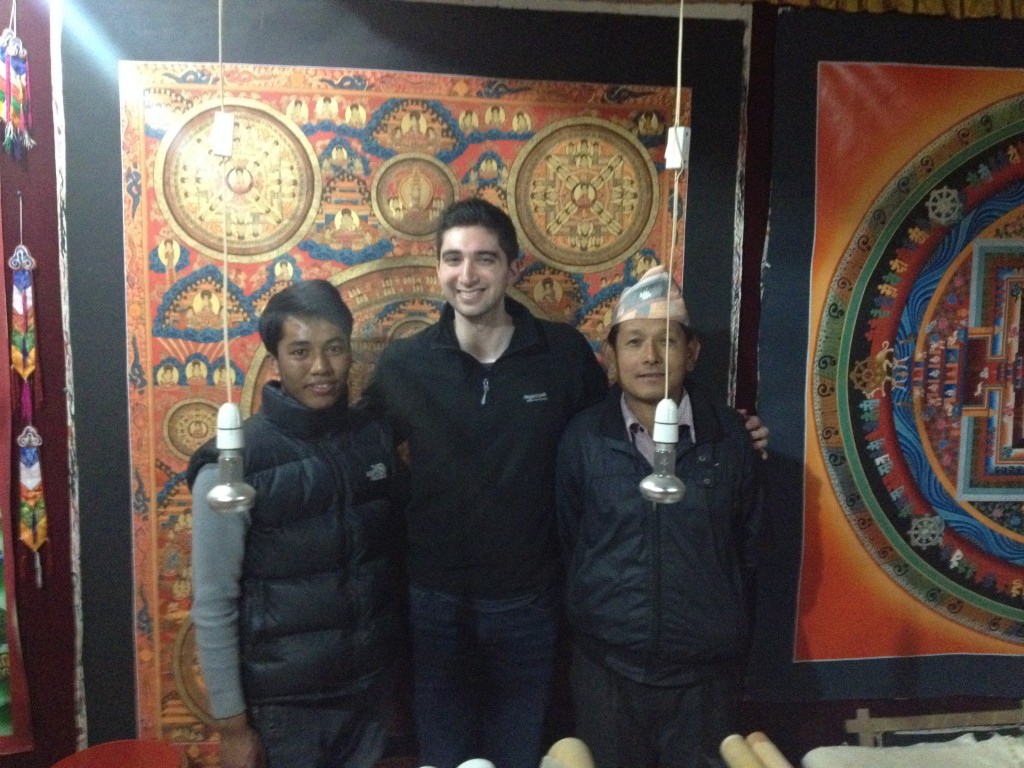 Me buying some art from the Old Monastery Thanka Painting Art School & Co-operative. The painting we bought was painted by the uncle of one of these guys!

The highlight of the first few days for me was shopping for Thanka art – a Tibetan style of painting that Nepalese and Tibetan people (especially monks) train in for many years. We actually spent most of the first day looking at artwork, albeit of course visiting the very beautiful Durbar Square in the city. Everyone seemed to be selling this type of artwork – even our guide that we got on the square took us to his little boutique (but his accumulated masterpieces were a bit to expensive for us!). By the end of our tour with some time to kill before dinner, we were approached by an old man telling us about his shop selling Thanka art made by monks in a nearby monastery, which turned out to be another branch of a recommended shop we had visited earlier. We spent probably at least an hour looking at all the different artwork on offer at this particular shop and the work of a few different ‘masters’ (people who have been painting this type of art for 10+ years). We ended up buying some artwork painted by the owner’s uncle (Kumur Lama) which both Hat and I were very happy with! Lugging around a big souvenir bought on the first day was not the best decision in hindsight though. 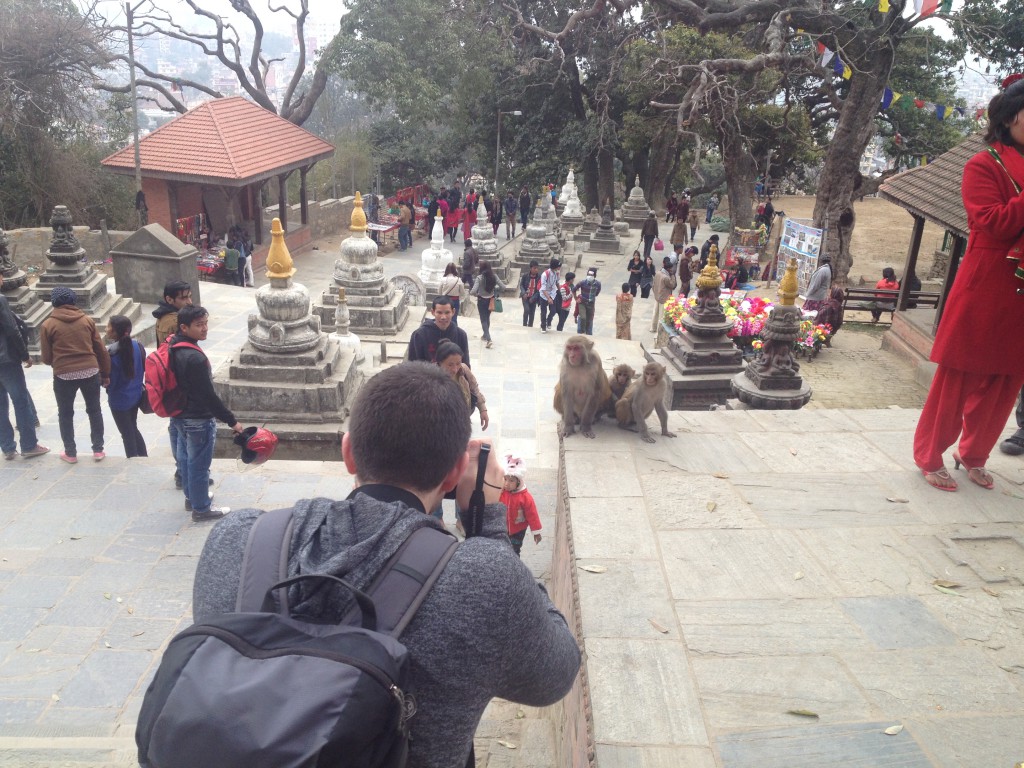 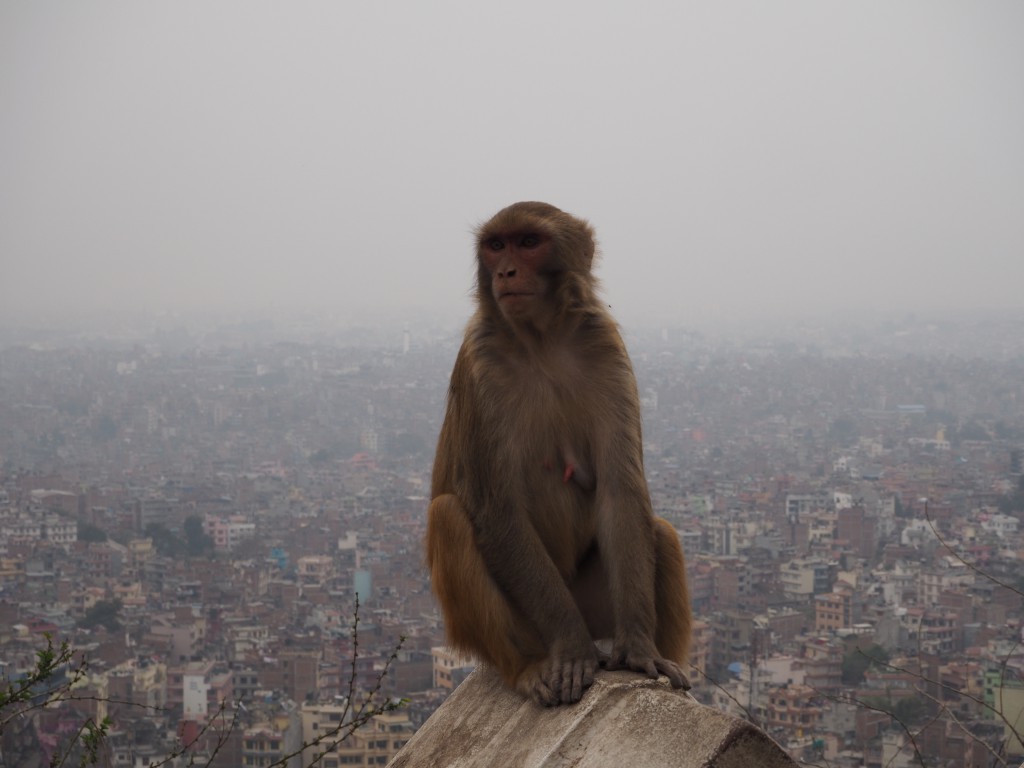 Monkey in front of the Kathmandu Valley

My other highlight was probably the monkey temple, as it was amazing to see so many monkeys about! They were quite mischievous though and I’m pretty sure one of them had an eye on my camera…

Hat’s highlight was Patan (until we went to Bhaktapur in the Kathmandu Valley on the last day), where it had it’s own impressive Durbar Square too, and had a great museum which explained a lot about the Hindu and Buddhist religions – something we were struggling to grasp before. 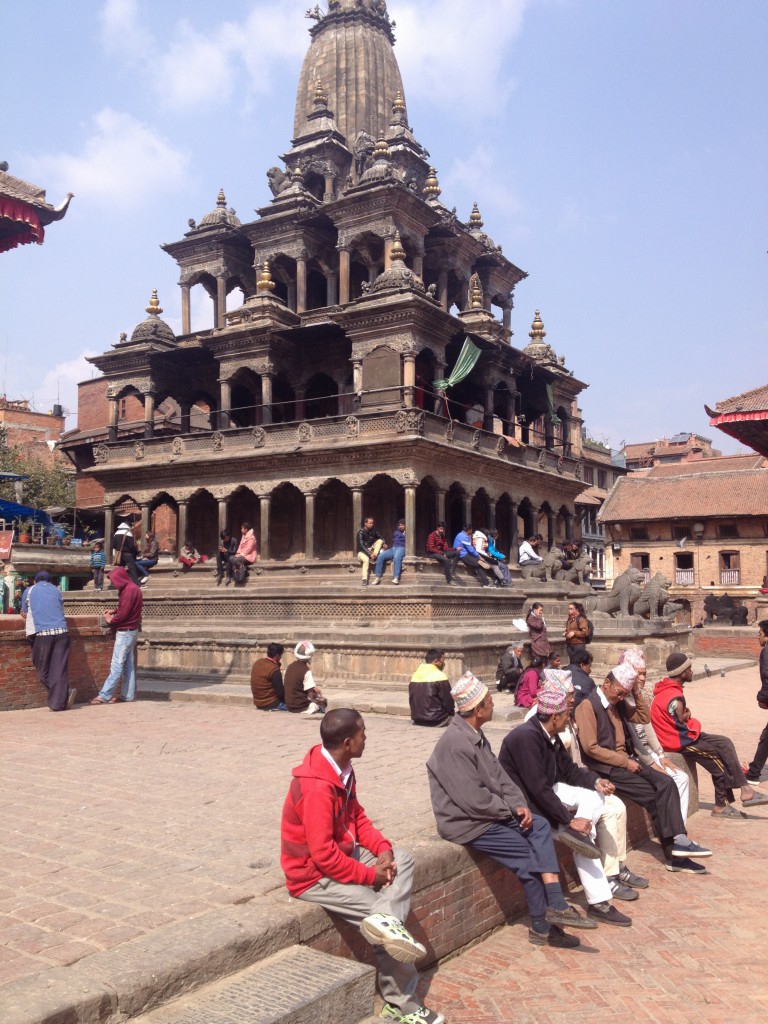 One of the many amazing temples in Patan’s Durbar Square

We also had time in the first few days to plan out the rest of our time in Nepal. We ended up booking a tour with Himalayan Encounters, which was recommended in the Lonely Planet, and is also the Nepalese operator for Intrepid (among others). We planned to head to Chitwan National Park for 2 nights, followed by a 5 day trek around the Ghorepani circuit, including a few free days in Pokhara – the nearest and second-biggest city in Nepal. 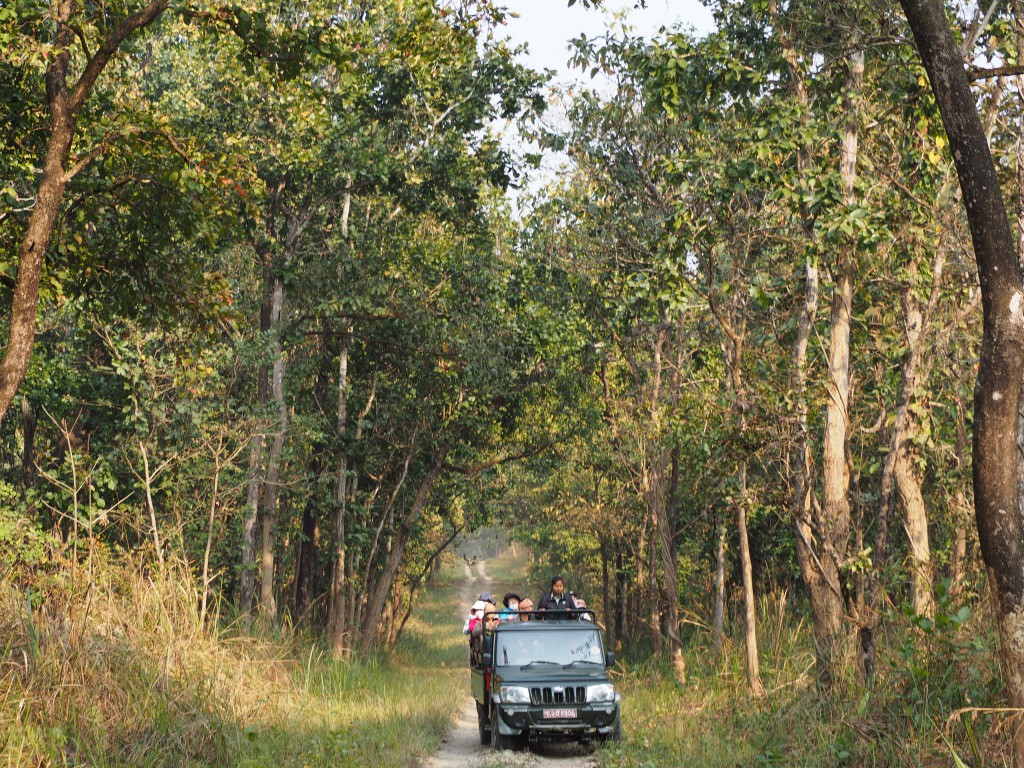 Our 4×4 safari in Chitwan National Park 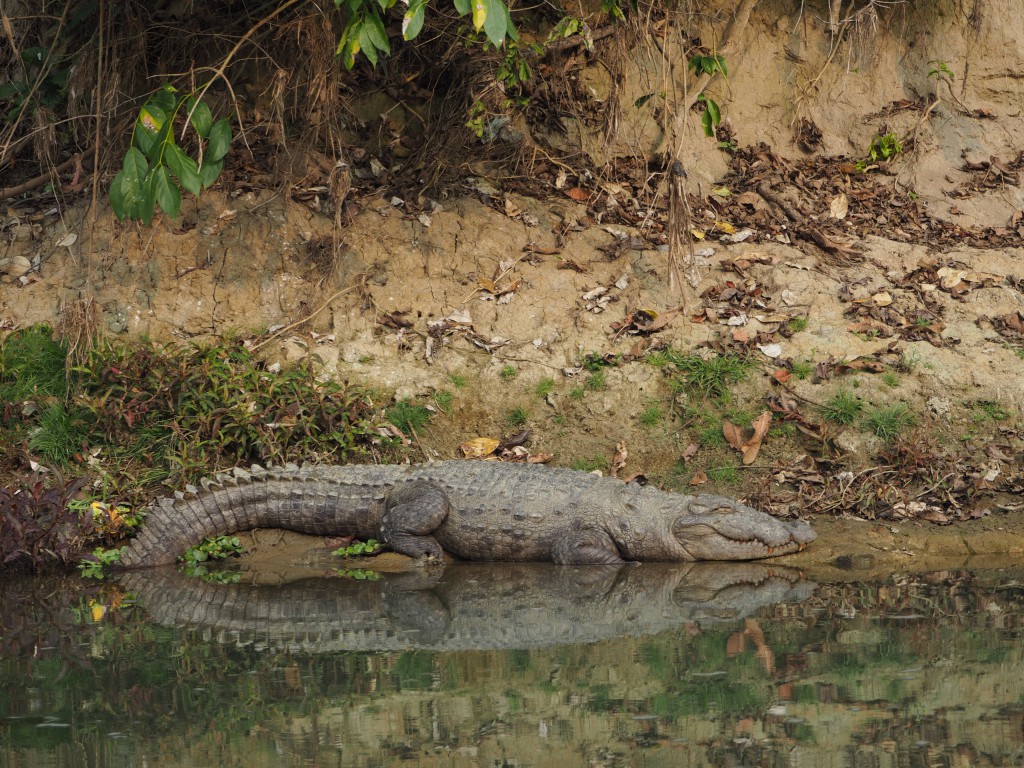 Chitwan was really a great experience – we visited a local village, went on a morning canoe ride down the crocodile-inhabited river, did a 4×4 safari around the park and had an early morning safari by elephant! It’s also the place where we met Anne and Arthur – who were booked on the same itinerary as us from Chitwan to Pokhara & trekking. We were really impressed by how close we got to some wildlife – the canoe was just a few meters from crocodiles sitting on the bay, and our elephant got really close to two rhinos who didn’t seem to mind us all being too near. 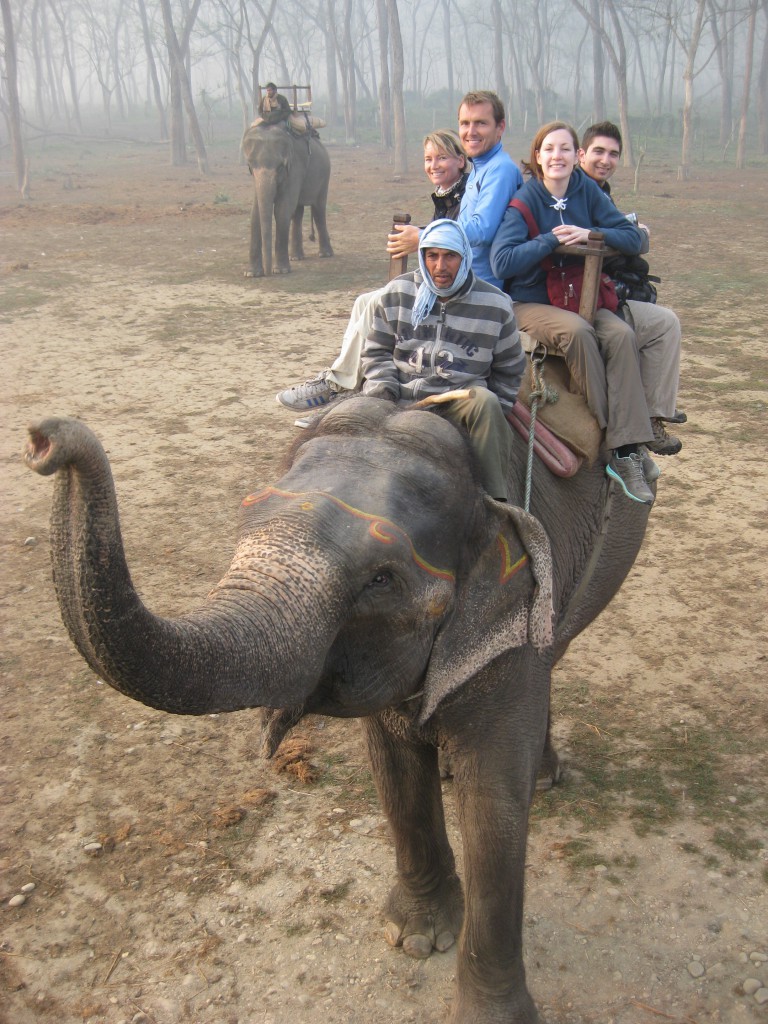 Our elephant safari on Maya the elephant 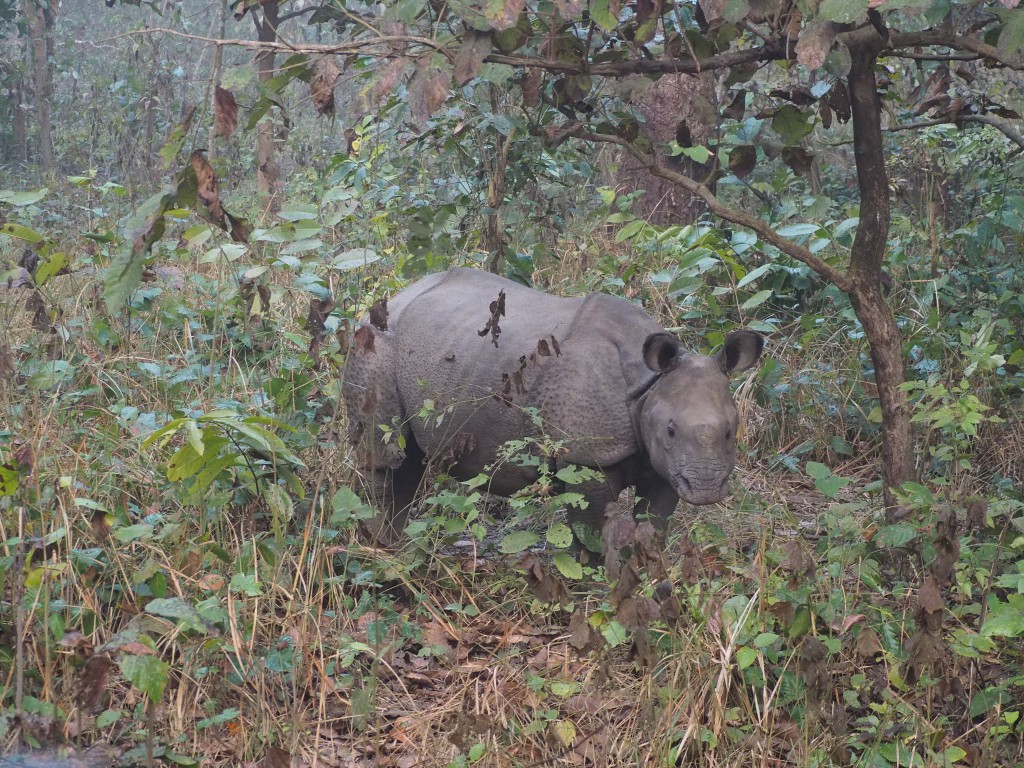 A rhino we saw on our elephant safari! It didn’t seem to mind being near the elephant

From Chitwan, we headed to Pokhara and were met by our guide for the trek KB. We found Pokhara quite touristy, but Hat very much enjoyed the pizzas at Moondance restaurant!

After one and a half free days in Pokhara we were ready for our trek. The first day was a 1000m ascent to the town of Ulleri from our starting point Nayapul. The first 4 hours of this was fine and pretty steady, but the last 2 hours was a steep climb which we all struggled with quite a bit. We arrived at the tea house we were staying at, and I think due to a combination of factors (exhaustion, not feeling 100% for the last few days & generally not being as fit as I should have been) I got pretty ill – I started to shiver quite a lot even though I wrapped up in a sweater, hat, gloves, a sleeping bag and 2 duvets! Hat got a bit worried but I knew I just needed to get some sleep as I was exhausted, so I spent from 6pm til about 7am sleeping it off. 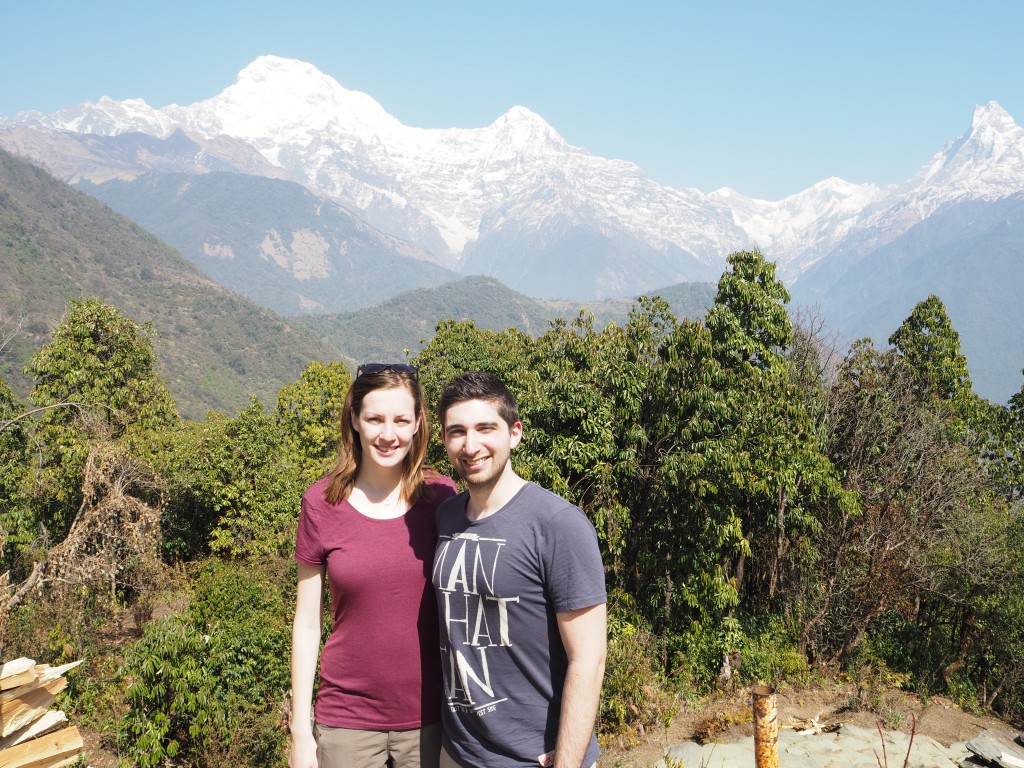 Me and Hats in front of the Annapurna mountain range

The next day I felt much better, and we continued to go uphill another 900m which again was a little tough (but easier than the previous afternoon). After another stay in a tea house, we woke up at 5am to start our trek to the peak of our climb – Poon Hill at 3210m high.  We arrived to see the sunset and the views were amazing! After about half an hour of taking photos etc we did the 45 minute trek back down to have breakfast and then we began our trek to Tarapani in quite icy conditions. I found sliding around quite fun, and it was my favourite day, but Hat found the conditions a bit hard (but luckily our porters were on hand to help her on the slippery paths). 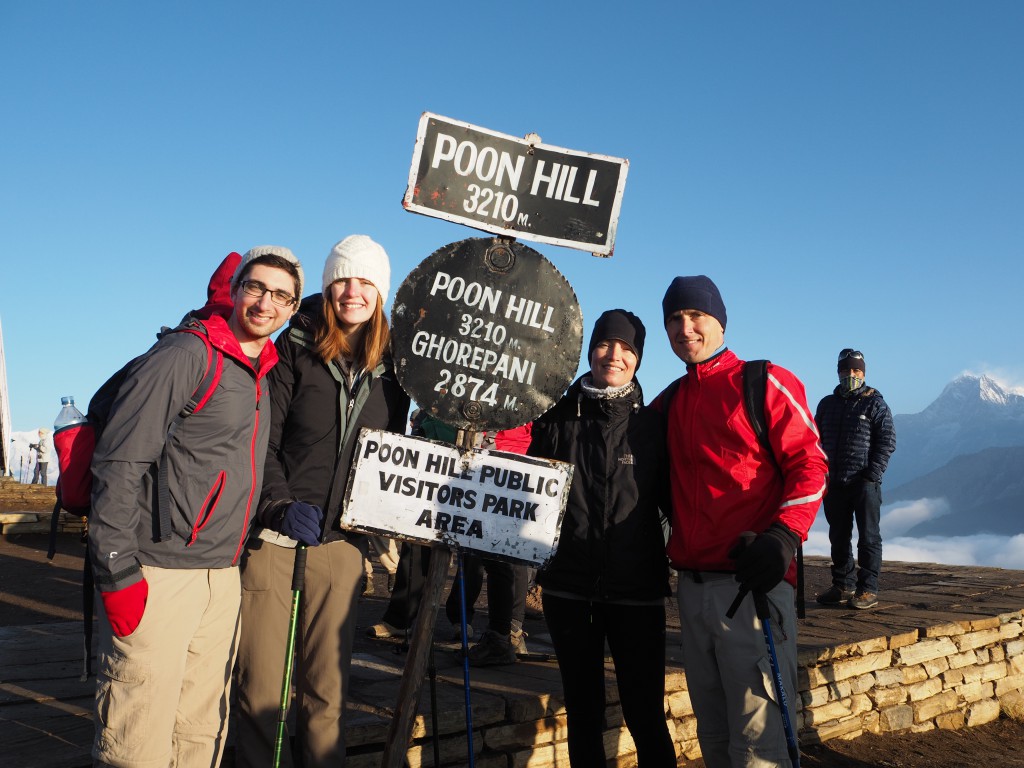 The view from the top of Poon Hill

We woke up to fantastic views of the Annapurna mountain range the next morning from our tea house as we were still quite high up (2700m). The next day was our easy day of only about 3 hours walking. The ice had cleared and the sun was out in full force when we arrived at our final tea house. We had plenty of time on our hands to lay out in the sun, read and just generally relax before our last 6 hour day trekking back to Nayapul.

Relaxing on our descent when the sun was out

We arrived back in Pokhara for one night before we made our 8 hour, very bumpy, coach journey back to Kathmandu for 2 nights. Now we’re off to Varanasi to begin the India leg of our journey for about 6 weeks! Hopefully there I’ll be able to meet up with some family around the country, and although we know India will be quite a culture shock, we’re very much looking forward to it.

We’ll post an update when I’m in the motherland 🙂