We meant to go to Santa Cruz in Bolivia first but hadn’t realised it was a malarial area (and wanted to save our anti-malarials for other bits of South America). So we jumped on a flight straight from there to Sucre on the tiniest plane (only 40 passengers) which felt like a private jet and flew low over the stunning Bolivian mountains.

On the drive from the airport into the city we immediately got a sense of how different Bolivia was going to be to other countries we had already visited in South America – we had that same excitement that we had when we first arrived in Nepal. For a capital, it certainly has a very low-key feel but it still preserves a lot of the traditional culture that other South American countries have lost. There were some real authentic markets in town that were great to explore and it was nice to see some of the locals dressed in traditional clothes – most notably women in bowler hats. 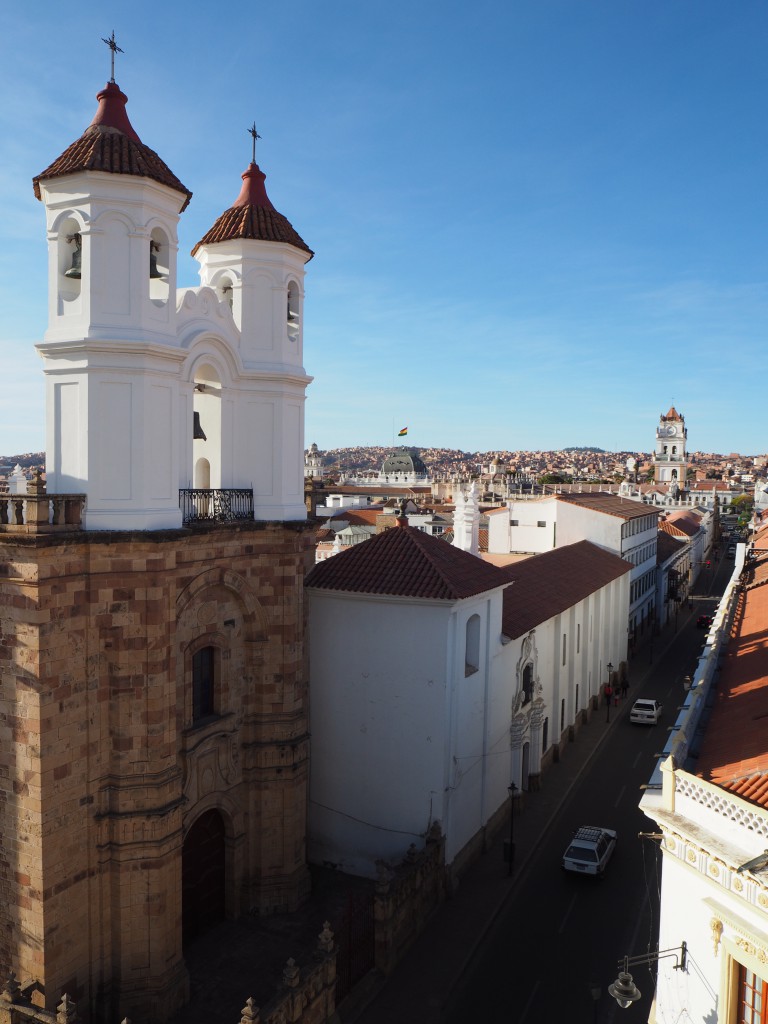 Shortly after arriving in the city we heard from other travellers that the nearby city of Potosi (meant to be the next place on our itinerary) had started striking and imposing road blockades around the city which was making visits to the city and nearby areas difficult. We tried to keep on eye on the strikes during our time in Sucre and were hopeful that by the time we wanted to leave the strikes would have died down (we knew we were going to base ourselves in Sucre for a while). 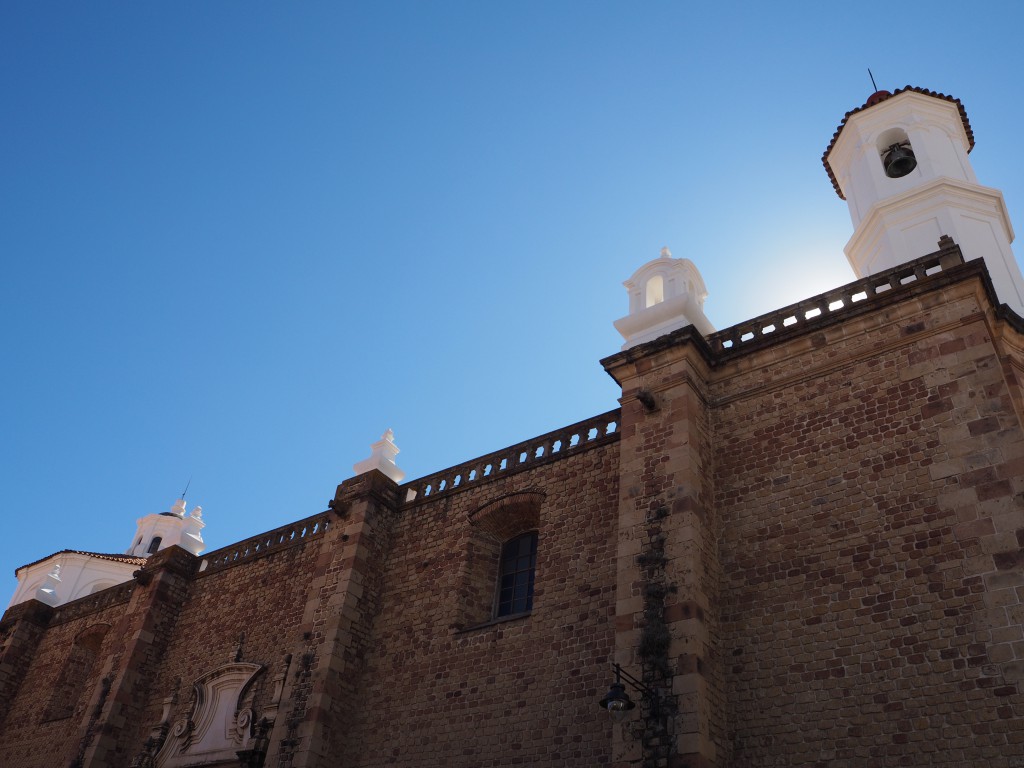 While we were in Sucre we did in total 7 days (4 hours a day) of Spanish at Sucre Spanish School with our teacher Veronica, who was great. I was a complete beginner but Hats had her GCSE behind her so she knew a bit. We decided to do joint classes, so I could learn and Hat could recap and expand her vocabulary. It turned out to be great! By the end of it, I felt quite confident to talk and get around (although of course no way near fluent, I just knew enough to order things and ask directions etc). We also got to know much more about Bolivia by spending some of our lessons just talking about life there. We also got homework…

To break up our Spanish lessons over 2 weeks, we decided a 4 day trek to the nearby mountains (Cordillera de los Frailes) at the weekend would be a good ‘break’. It actually turned out to be probably the hardest trek so far! The Bolivian food upset my stomach the night before the trek, so I wasn’t feeling 100%. That coupled with the altitude (we think), and having to carry a 70 litre backpack (50 each, but we only had a 70 and a 30 bag) was a recipe for feeling awful. We were on our trek (the longer one, most other people seemed only to be doing 2 days) with another English couple, Kevin and Joanna, and a local guide called Zulma. 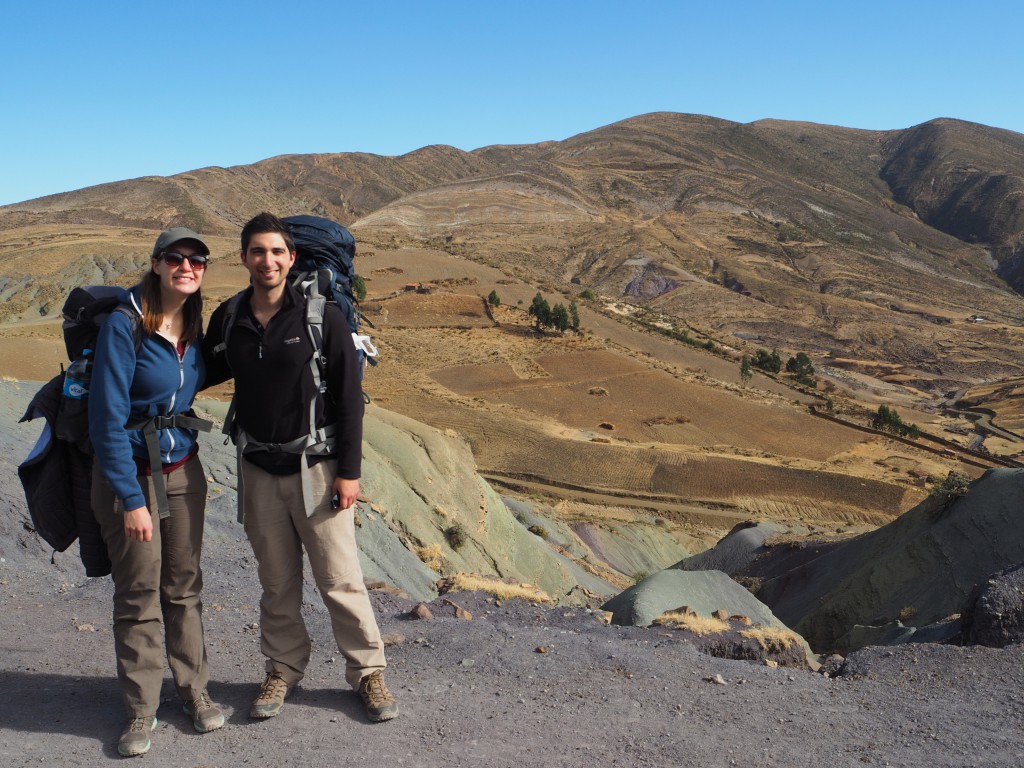 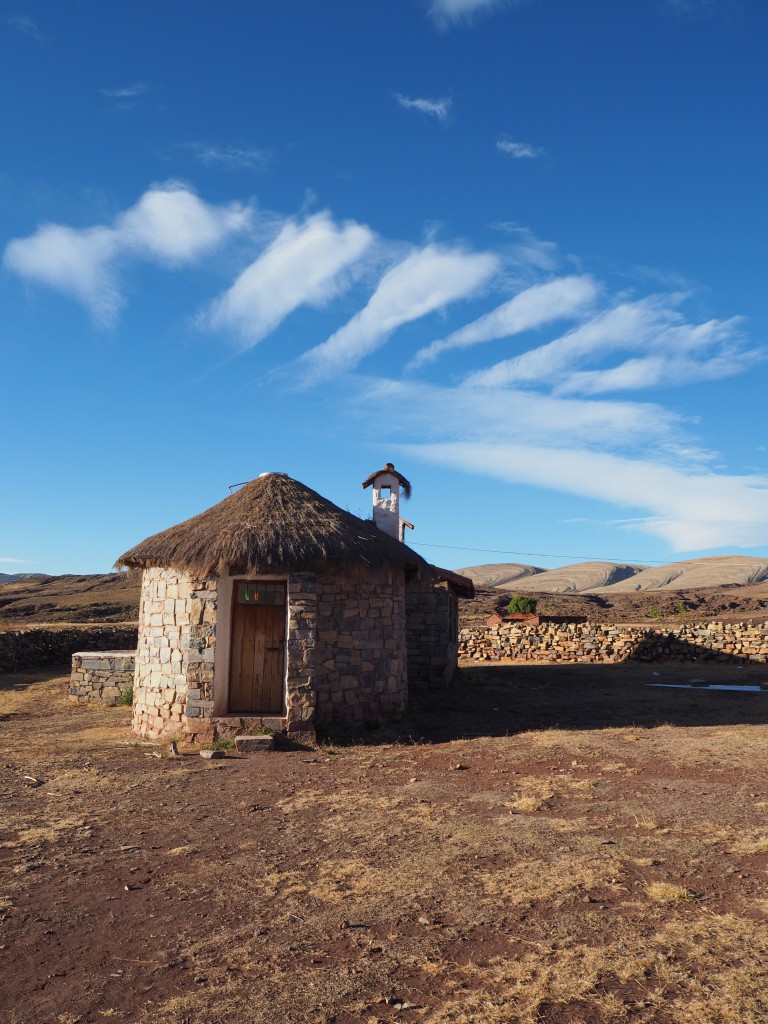 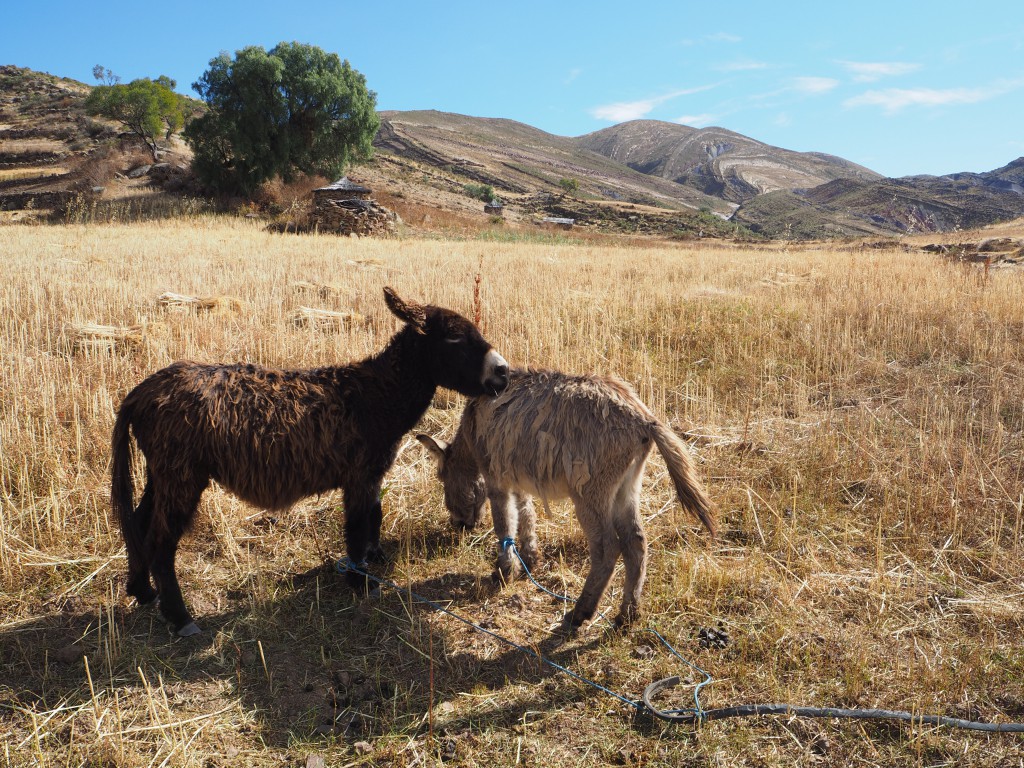 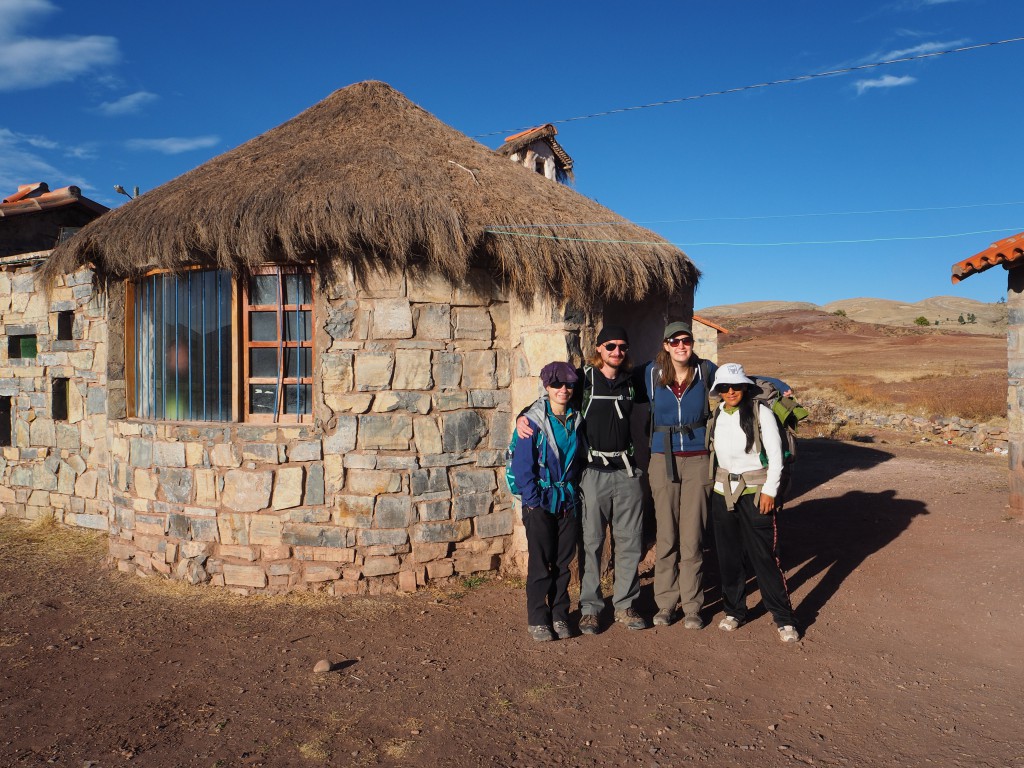 Despite it being tough, and feeling nauseous most of the time, we saw loads of interesting things, including 1500 year old rock paintings, the Marague Crater and some real 65 million year old dinosaur footprints from 3 different dinosaurs! It explained why we saw load of plastic dinosaurs in town. 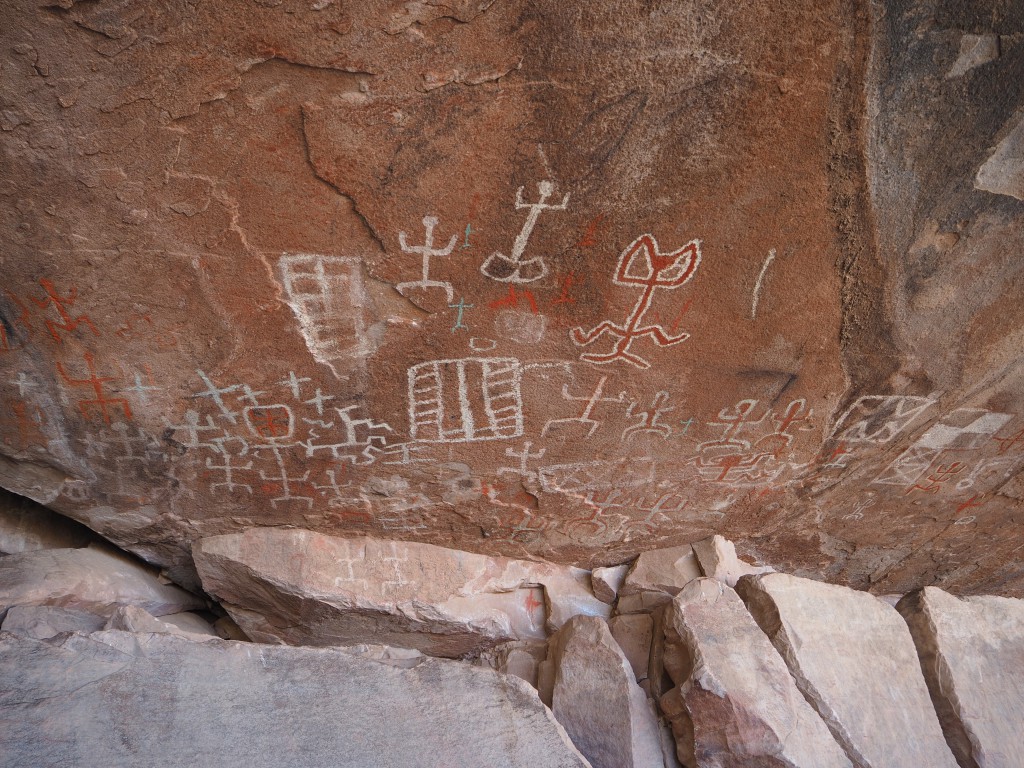 Rock paintings depicting calendars, people and livestock which were about 1500 years old 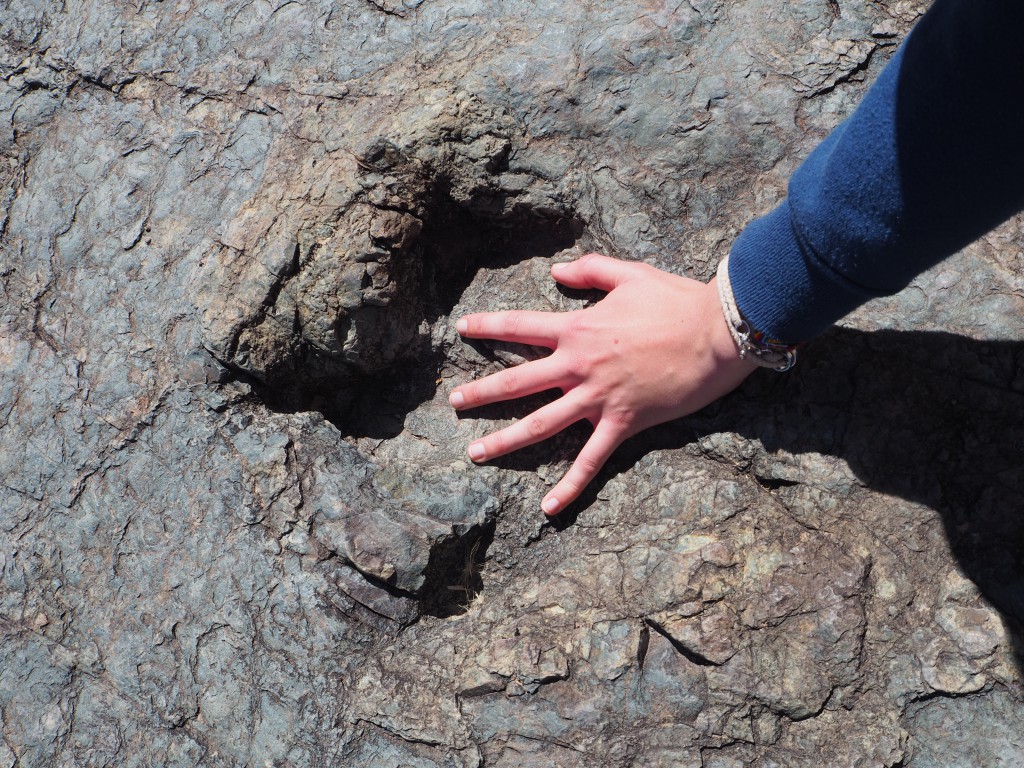 Hats’ hand in a dinosaur footprint! Over 65 million years old! 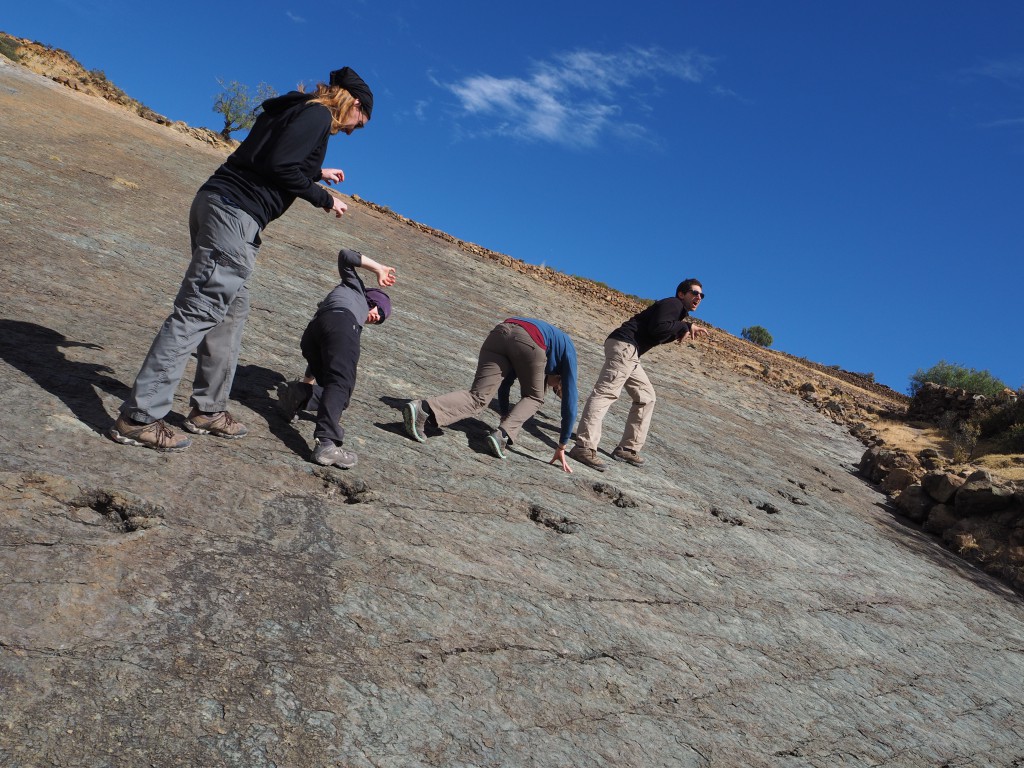 Pretending to be dinosaurs next to one of the footprint trails

We then came back to Sucre, and arrived in to news that the Potosi strike was still in full force, and in fact the unrest had spread further. Road blocks had been extended and we realised how silly we had been not to book a air ticket out of Sucre before we had left for the trek – we were kicking ourselves! We had to wait 4 days before we could get on any flight leaving the city. The worst part was that it was all that the travellers we met were talking about and we heard some awful stories from people that had had nightmare bus journeys trying to go around the blocks. I reassured Hat that Sucre really wasn’t the worst place to be ‘stuck’ – we filled the days doing the touristy stuff that we hadn’t had time for before, including a day trip to Tarabuco market and a cultural show at Espacio Cultural Origenes (both were much better than we expected!). 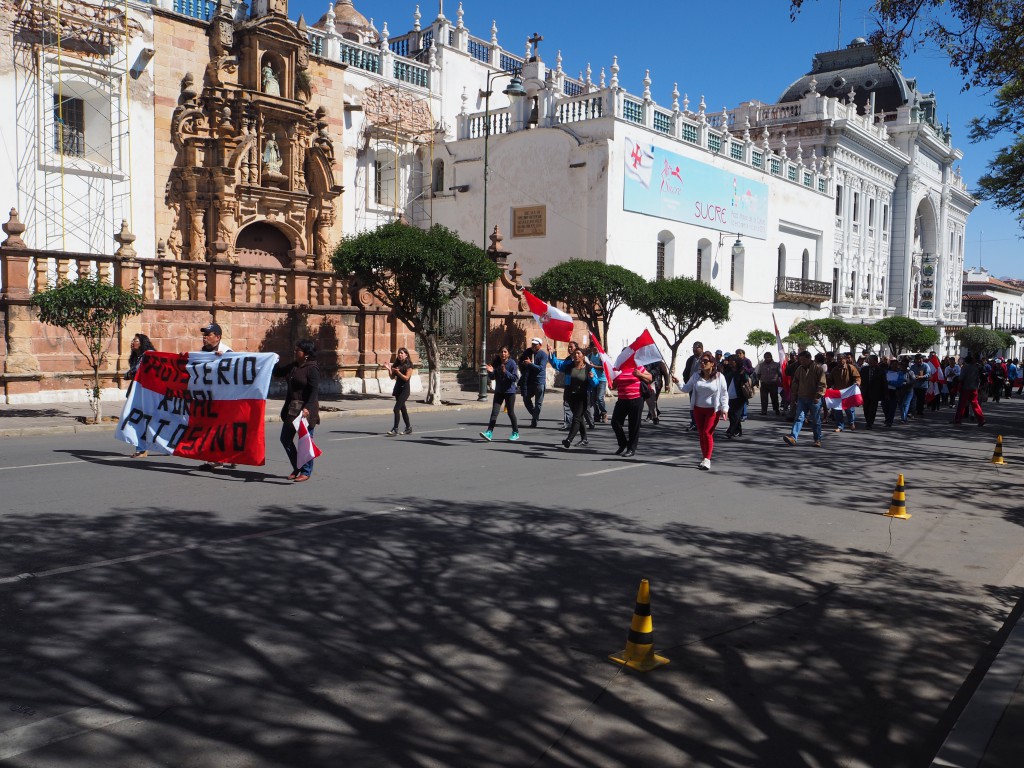 Peaceful Potosi protests reached Sucre, stopping traffic getting in to the main square 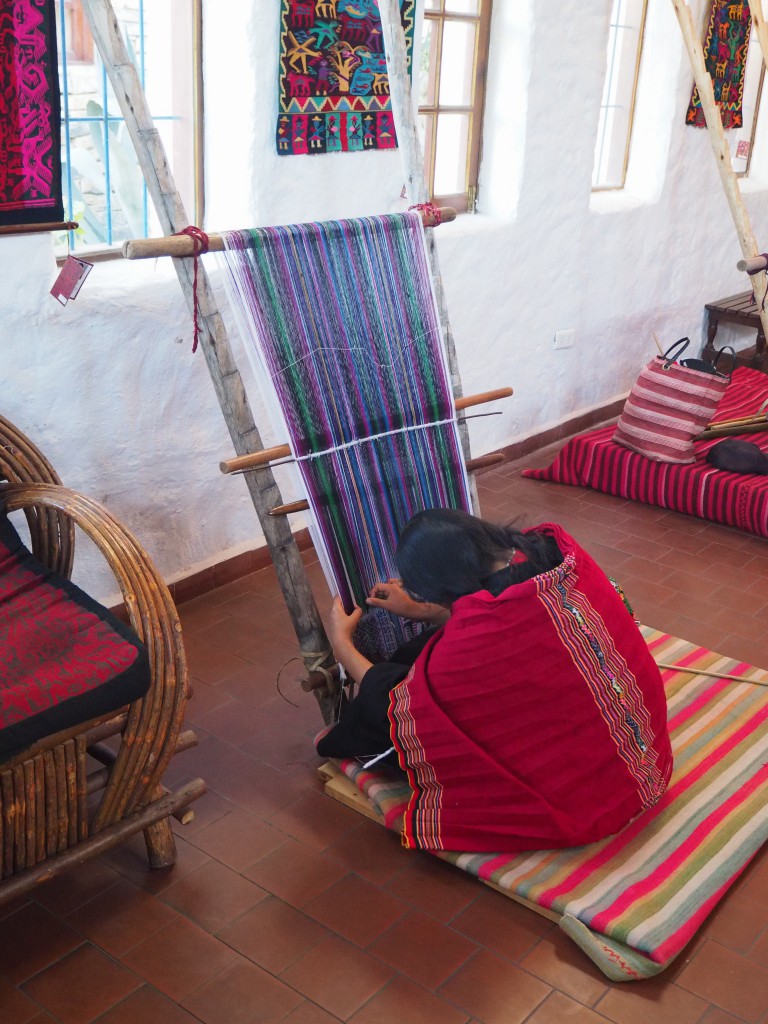 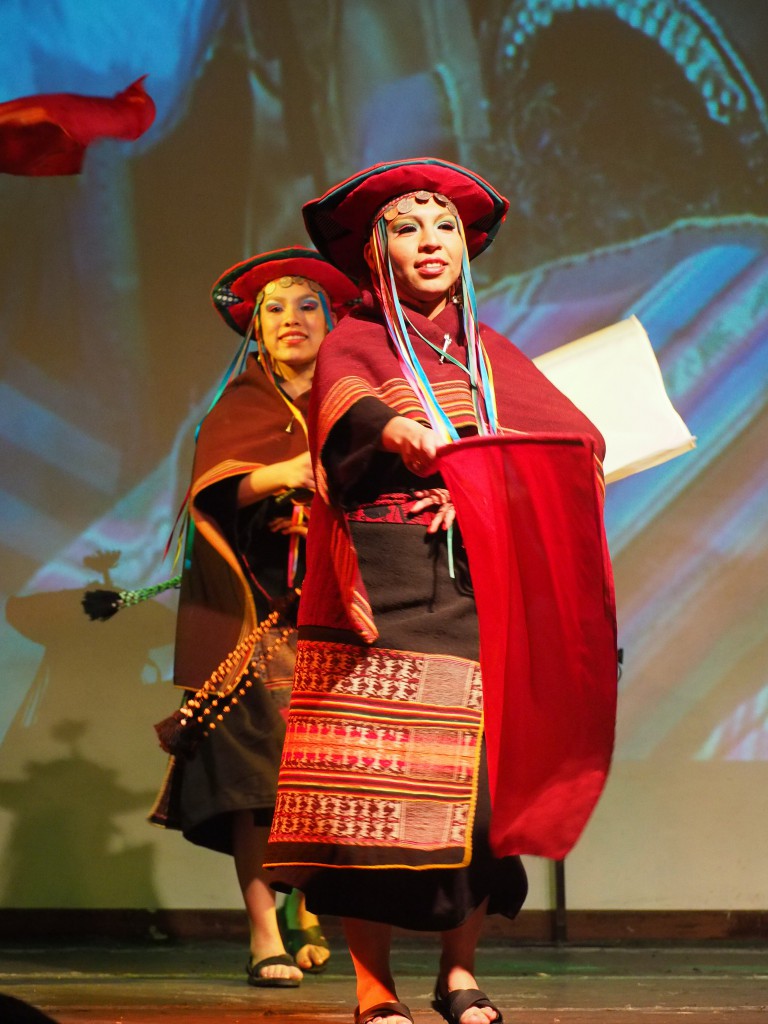 4 days rolled past pretty quickly in the end (for me at least, Hat still felt a bit trapped in Sucre) and we took another tiny plane to La Paz. We’d read that La Paz was pretty dangerous (thanks, Lonely Planet) so Hats was a bit apprehensive, but we both ended up loving our short time there. And like when we first arrived in Varanasi (India), I went on another voyage looking for a musical instrument, going in to about 20 different shops looking for a Churrango (a small guitar-like instrument that is popular in South America). Having bought too much (only in the last few weeks), we then had to send it all back home as we couldn’t carry it with us. We thought Bolivia would be pretty cheap to send stuff home from, but we were very wrong and it ended up costing us a small fortune! I spent the next couple of weeks worrying if the package would arrive home (they packaged it all up pretty badly) – but luckily it did, although I don’t know in what state…

We also did a walking tour of the city, which was one of the best we’ve done! One of the more interesting stops was the witches market, which sells crazy potions and llama foetuses (apparently burying one under your house is good luck?). By this point, the unrest in Potosi had reached La Paz, and as we were walking around the city we heard loud bangs that shook the ground – we found out later these were explosions from dynamite the miners were throwing at police! Our tour guide managed to get us into the main square, but on the day we were there it was packed with military and sealed off with barbed wire from any Bolivians (again, because of the protests). We were the only people allowed in the square apart from hundreds of pigeons (and of course the military). 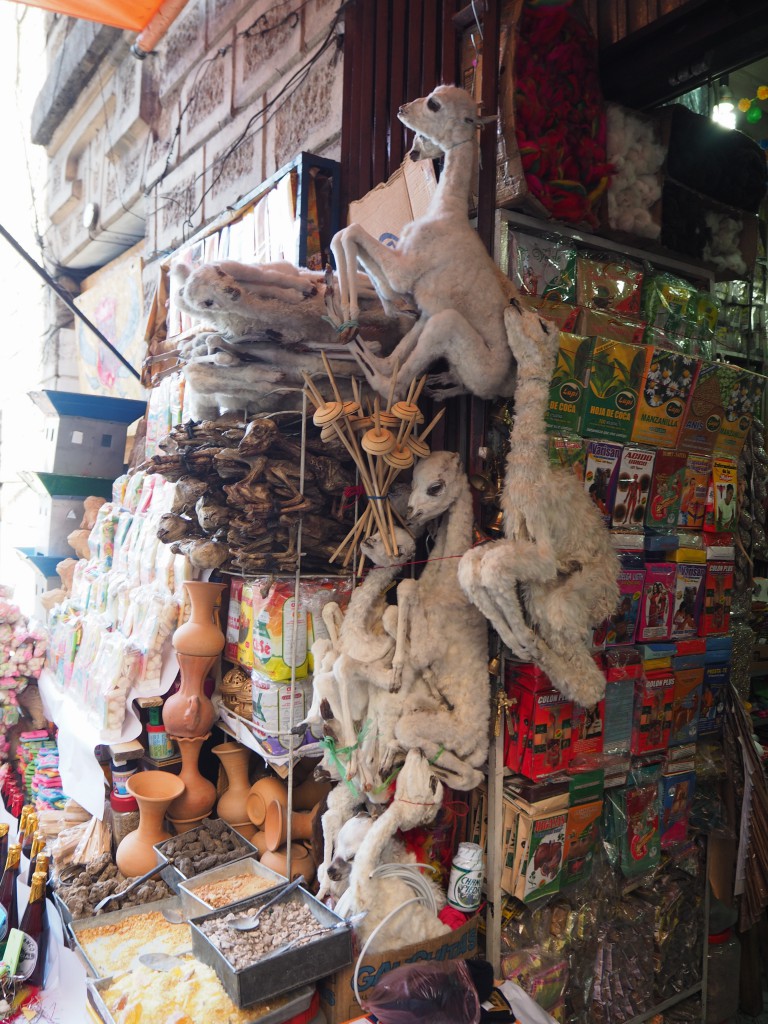 Next stop for us, due to our new route (thanks, Potosi) was Lake Titicaca from the Bolivian side, Copacabana. Lake Titicaca was so huge! You couldn’t see the end of it so you could well have thought you were near the ocean (although with the altitude, maybe not). 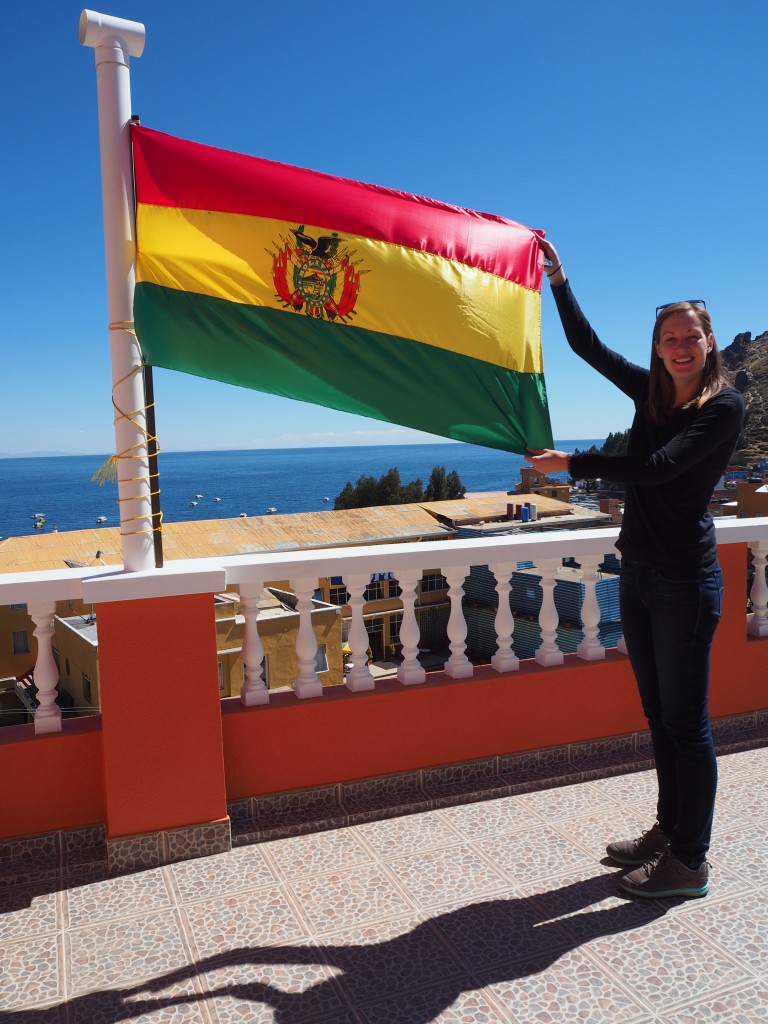 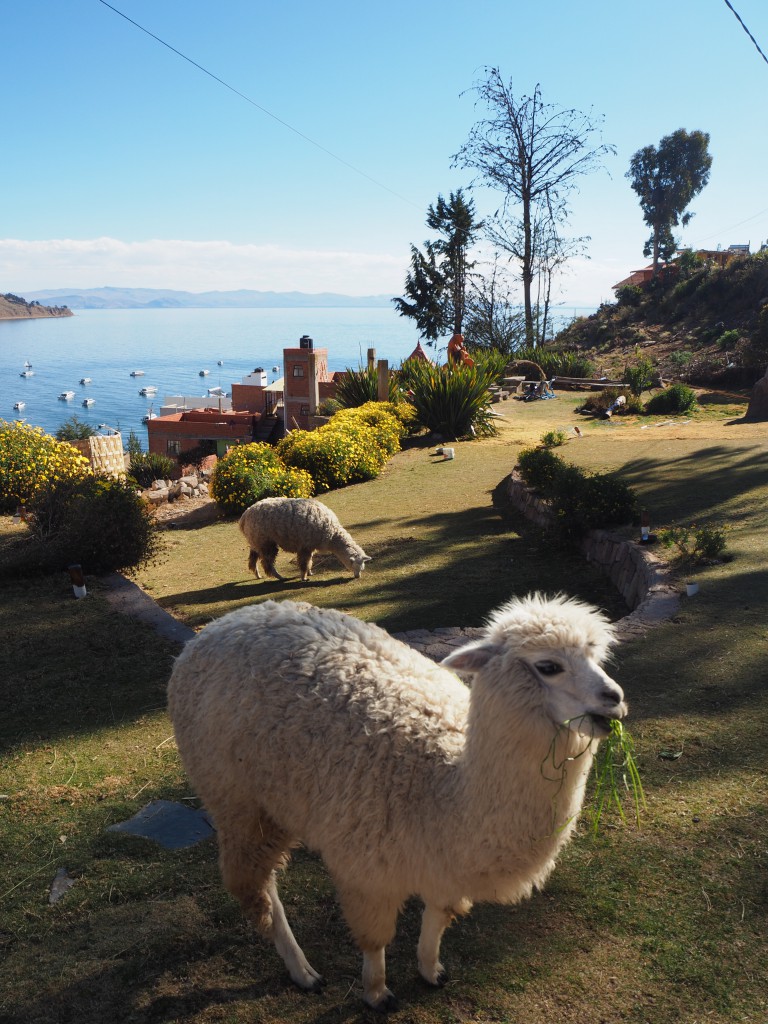 We got a boat to Isla del Sol, an island in the middle of the lake, and decided to trek from the north to the south of the island where we’d get a boat back. The scenery here was a series of pretty much untouched landscapes, full of local communities (in local dress and basic houses) and livestock which included several muddy pigs roaming around. We had a fantastic day exploring the island! 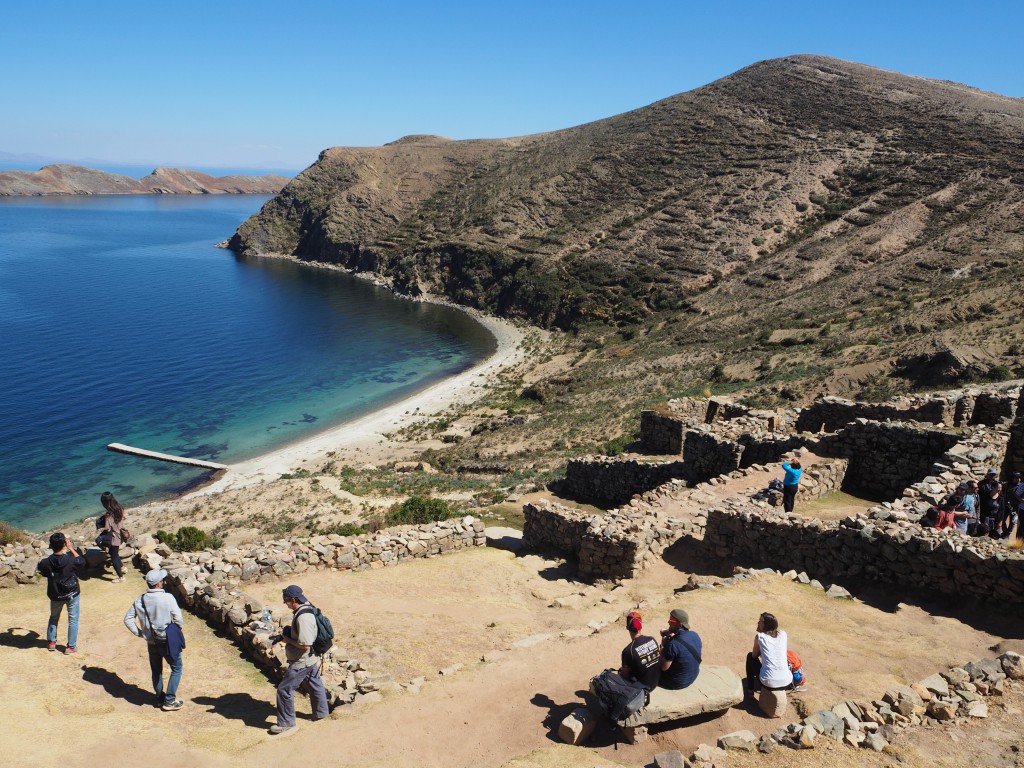 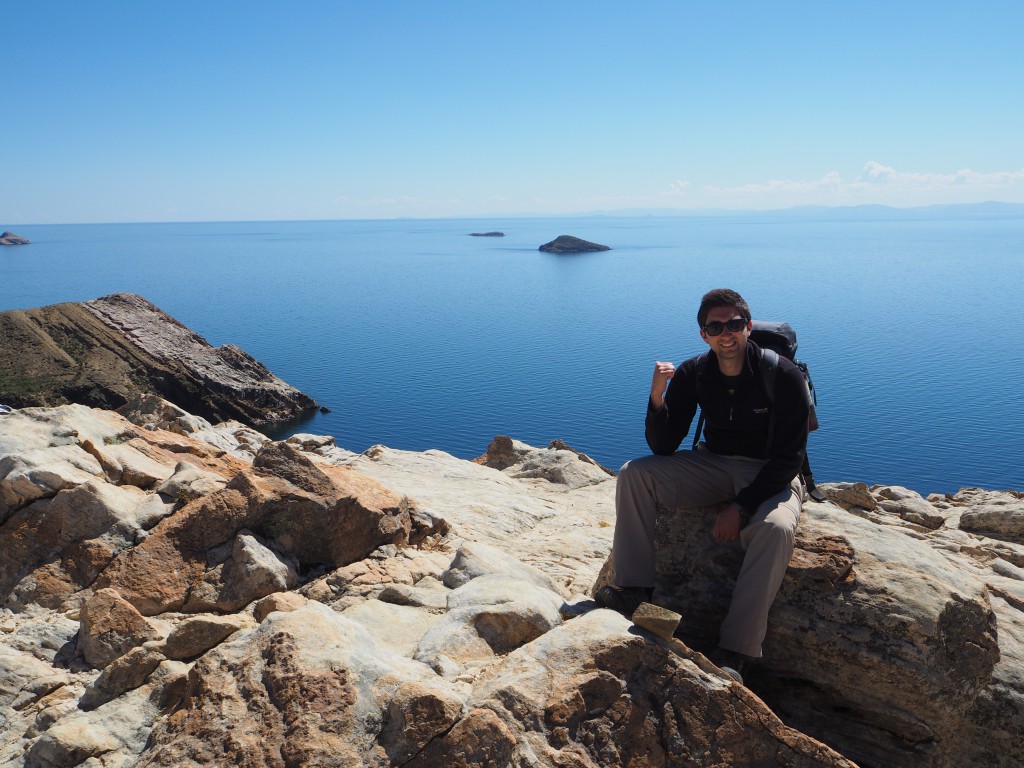 In front of the endless Lake Titicaca 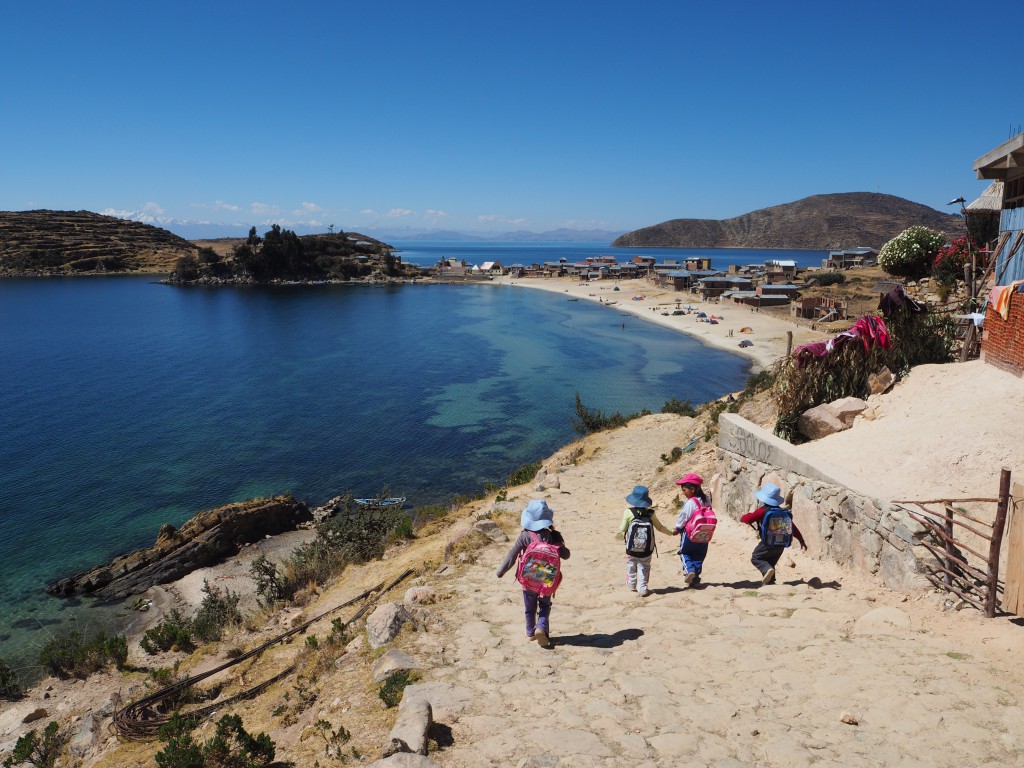 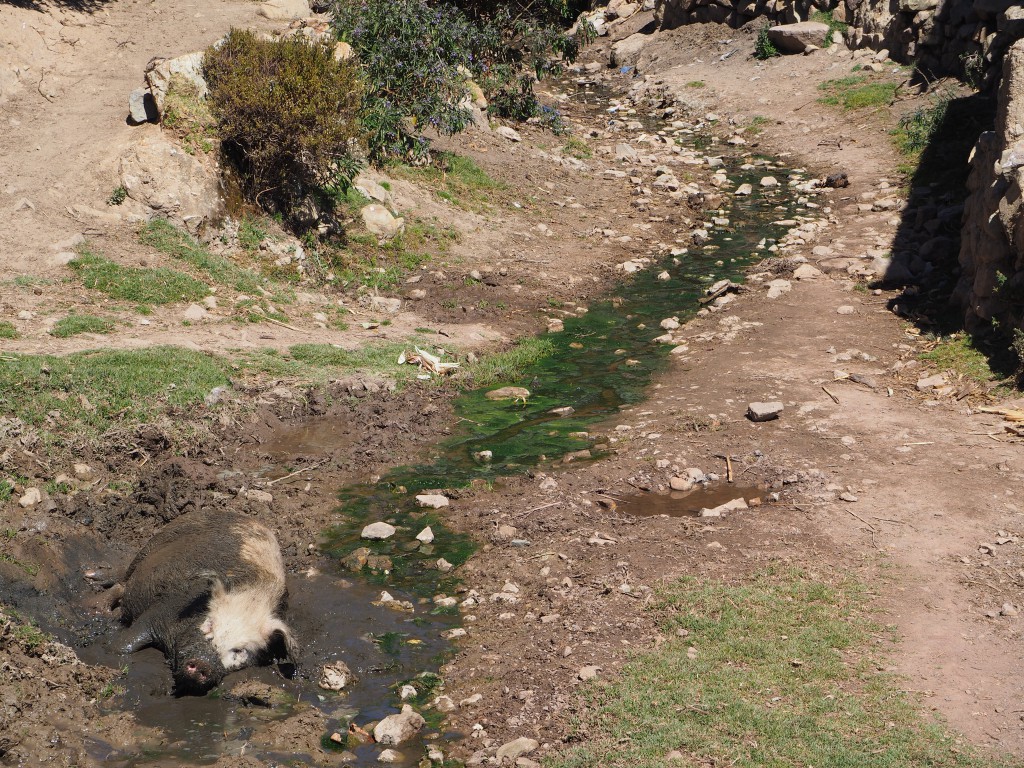 After travelling back down to La Paz, we got an overnight coach to Uyuni to do Salar de Uyuni (the salt flats). Again, because of the strikes we had to go a bit of a weird route to avoid the roads near Potosi – but we made it! We’d read and heard from others that tours on the salt flats can be pretty bad, including the drivers getting drunk on duty, but we’d heard good things about a company called Red Planet so we went with them.

Visiting the salt flats themselves was only actually one day of a 3 day tour that took us to some bizarre and remote scenery that I’ve never seen anything like. Firstly, there’s the endless horizon on the salt flats, which makes for some pretty good perspective photography (see pictures). I especially loved how the salt was organised in to hexagons in most places (why? I didn’t find out…). 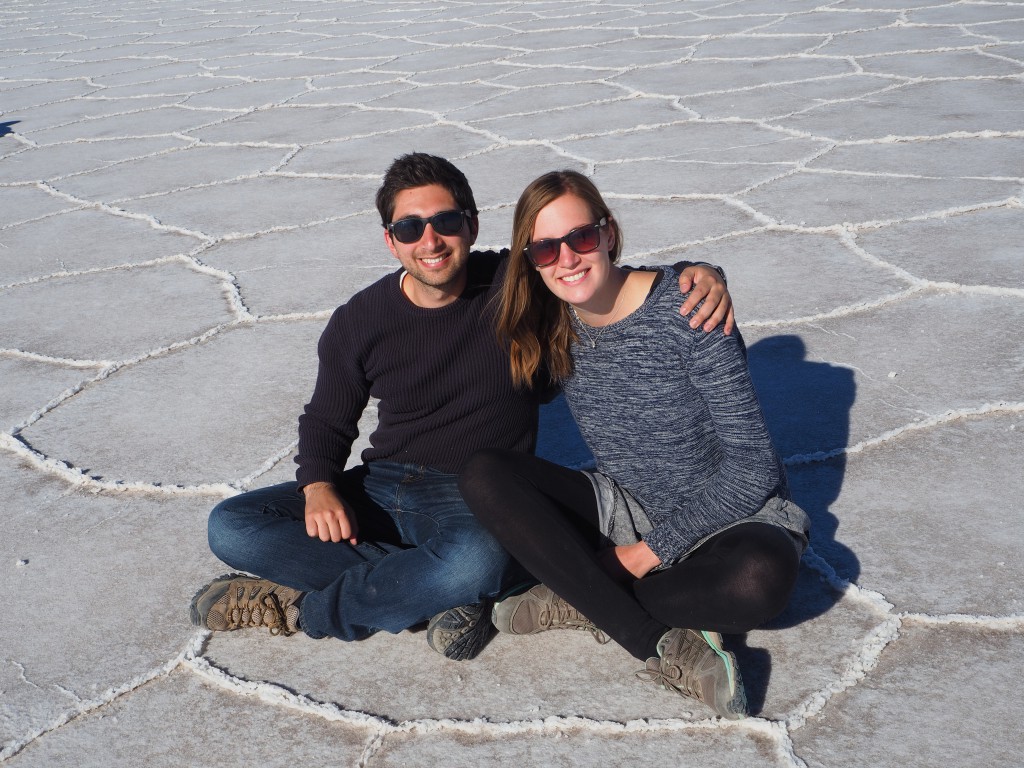 I had to make space for Hat in my salt hexagon 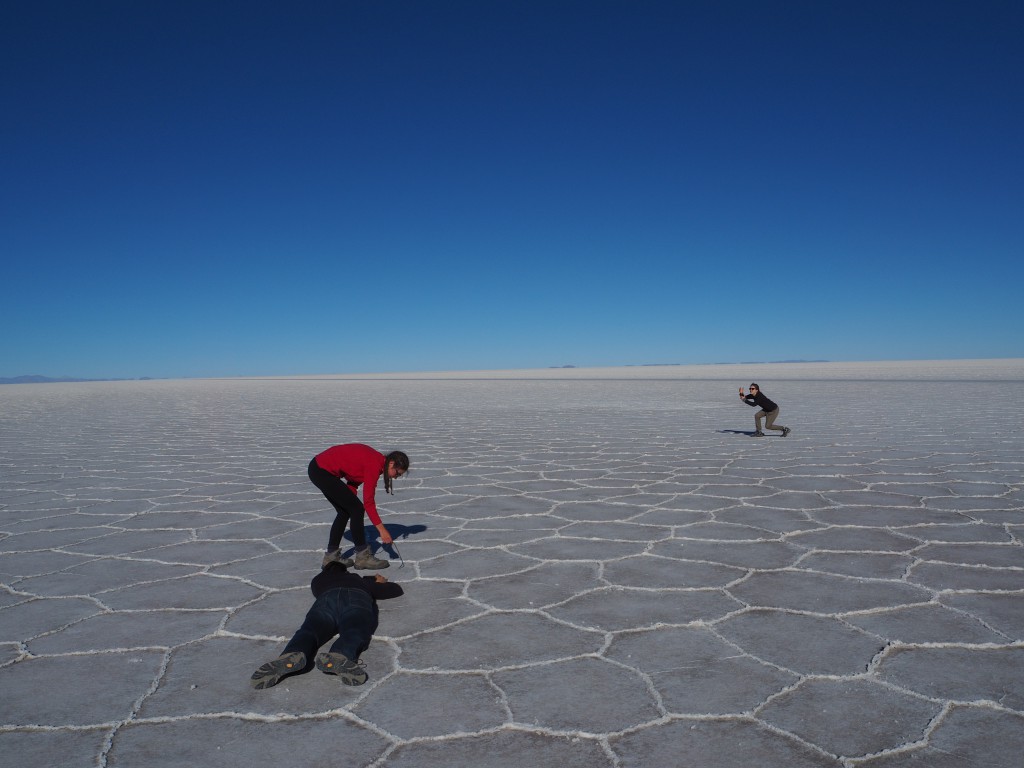 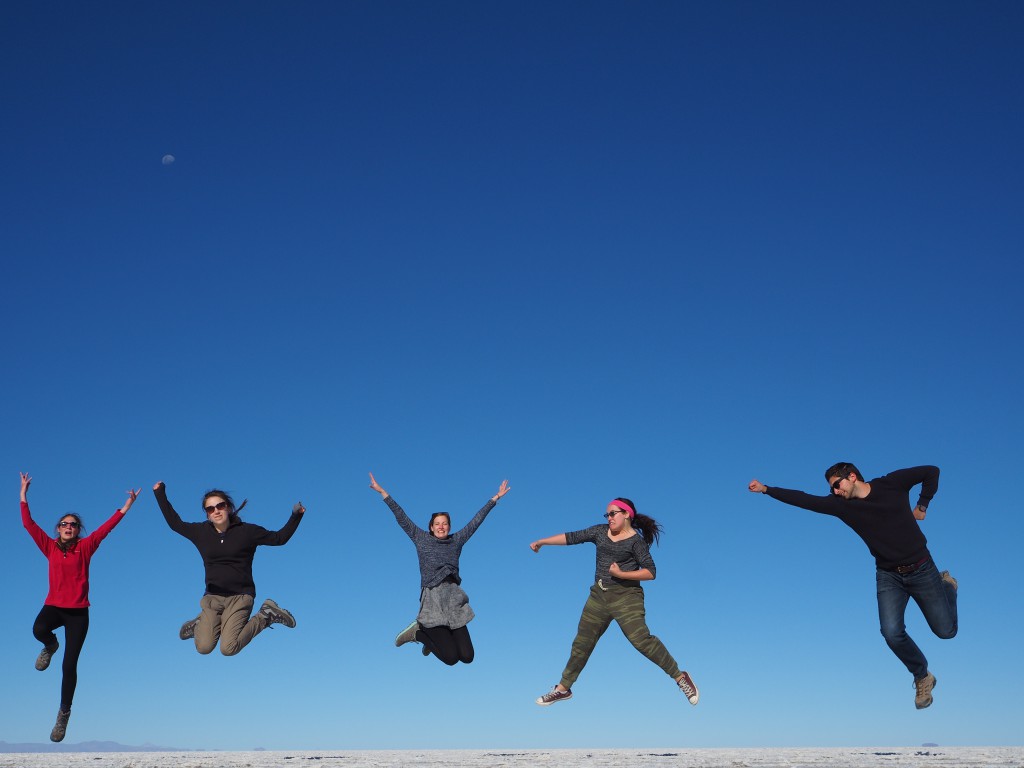 Endless horizons made for good non-perspective photos too 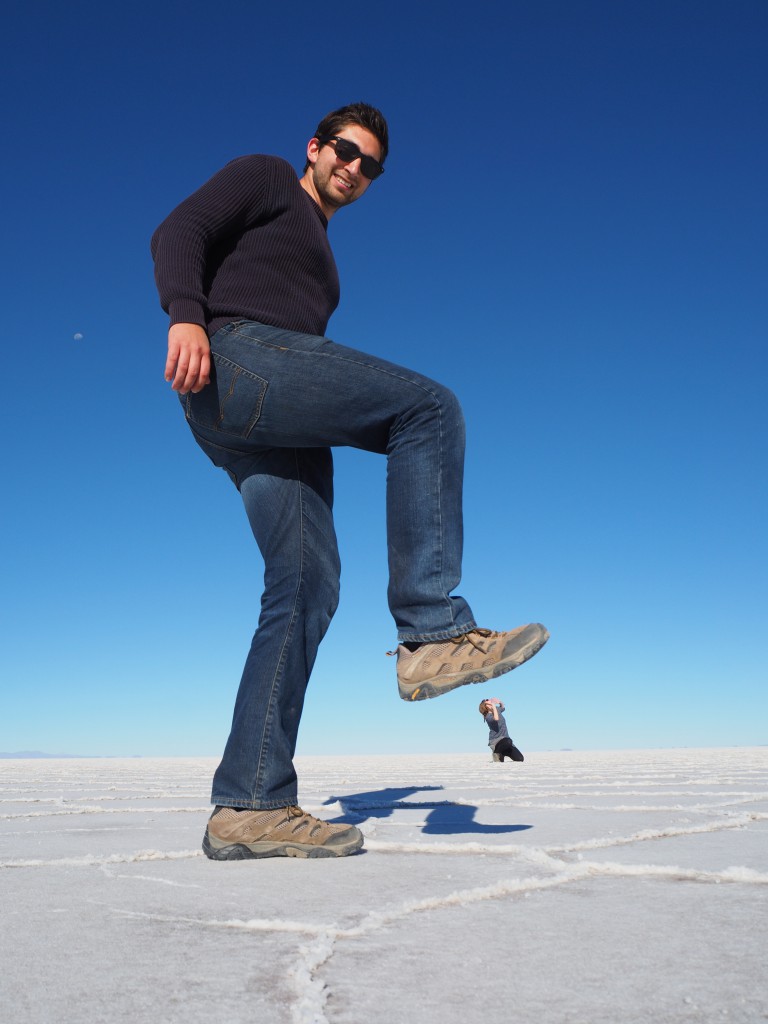 Hat thinks I look a bit too happy stomping on her 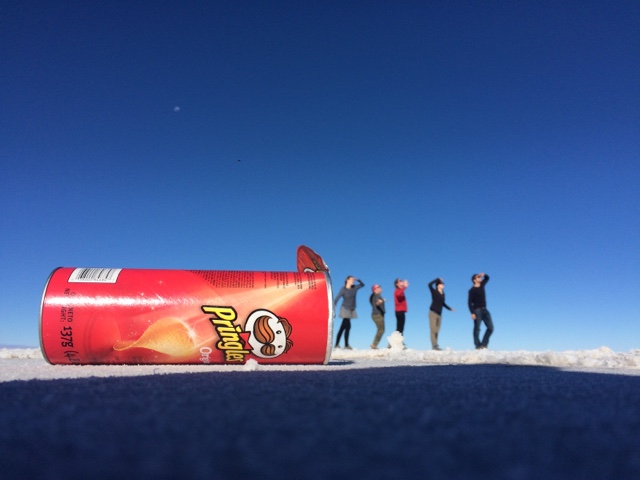 Our Pringles can came in use

Secondly, the Mars-like red Atacama desert that sits alongside the pristine white salt flats in some parts is utterly weird (and stunning), making you feel like you’re on another planet. Hugging cacti on Isla de los Pescados (a rocky outcrop with plenty of huggable cacti) was also pretty cool. Oh and the red lake (Laguna Colorada) was actually unbelievably red – it made us feel a bit like we were on Mars (minus the flamingos enjoying the rich-pickings from the mineral lake). 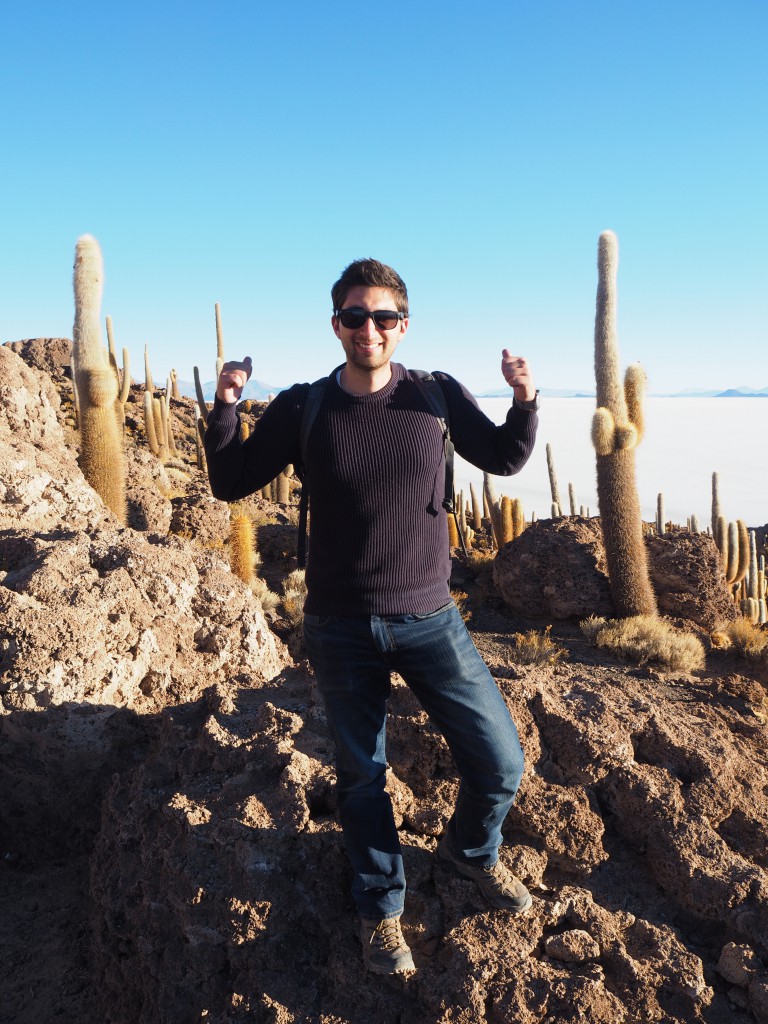 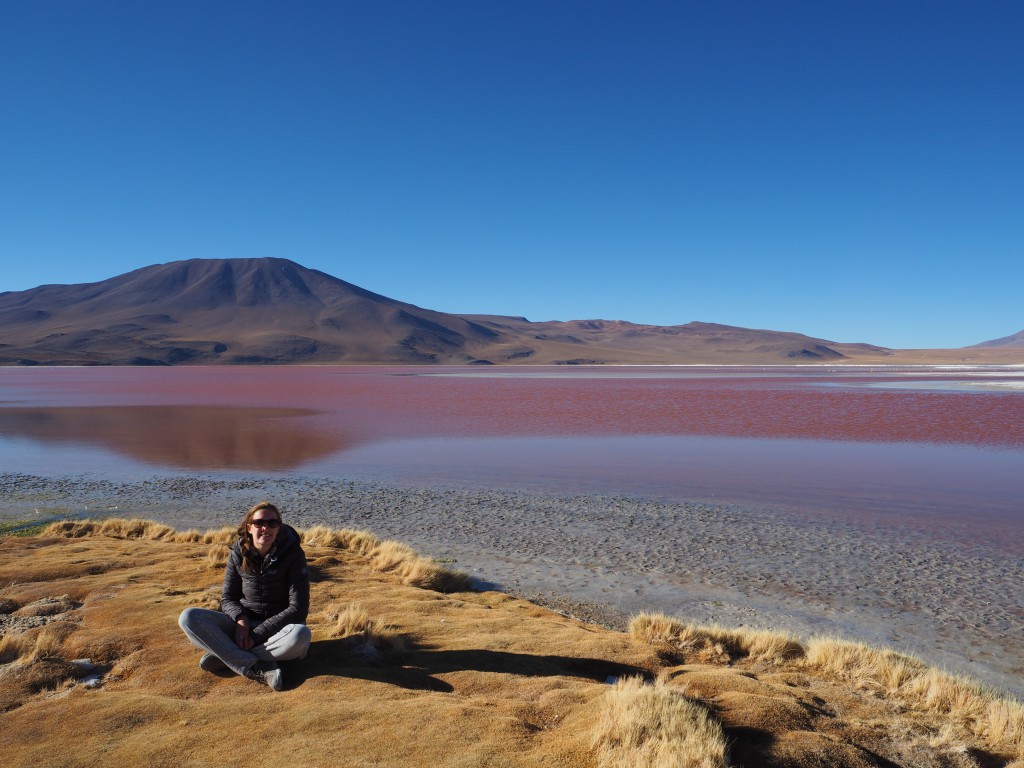 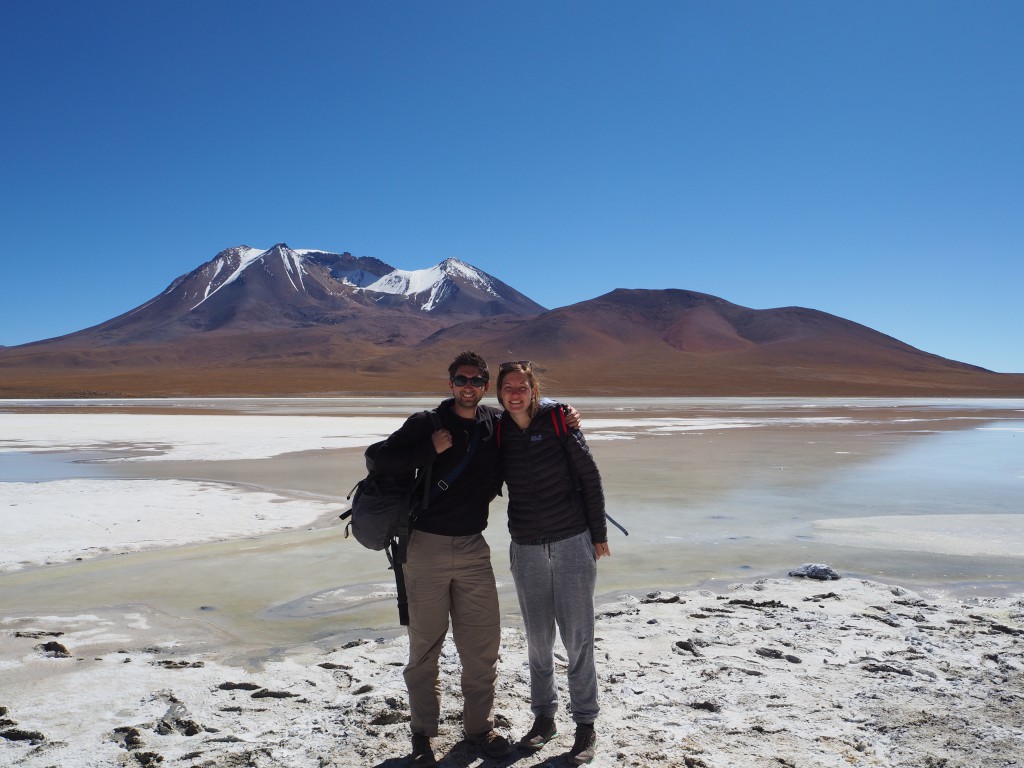 It was pretty cold in the desert, especially as at times we were at about 5000m altitude. On the last night we slept at about 4200m, which was probably my worst night of sleep ever. Insomnia, hard to breathe, and hearing everyone else in our dorm struggling to breathe in their sleep made for a very unhappy Steve. Eventually I swore myself to sleep (expletives which apparently Hats heard too).

At the end of the tour, we were driven across the border from Bolivia to San Pedro in Chile to rest up, shower (3 days of no showers…) and warm up before we would continue north to Peru!