We finally arrived in the motherland – landing later than planned in Varanasi after boarding probably the most empty flight from Kathmandu. It was nice to feel the heat as soon as we got off the plane! For this part of India we had a tour booked for just the two of us with an Indian company (travel n tours india) which we found in the UK on TripAdvisor before we began our trip. So we had a friendly face with a “Mr. Steve” sign in his hand when we got outside the airport. 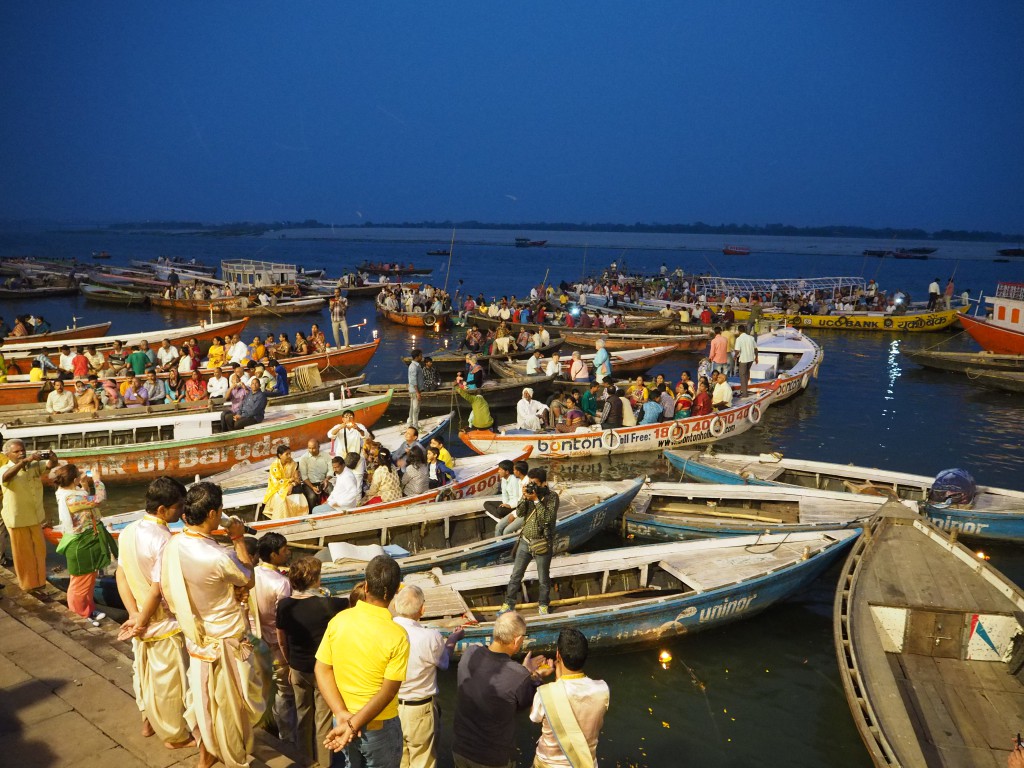 Dassawamedh Ghat in Varanasi at the start of the Aarti ceremony

Our first impression of Varanasi was that it wasn’t as hectic as we thought it would be, which was great! We had been bracing ourselves for the culture shock and the bustling atmosphere (as supported by the Lonely Planet book that is Hats’ main companion on this trip – she’s even reading it as I’m typing this). We arrived at our very grand hotel to have very little downtime before we headed out with our guide and driver to the evening Hindu ceremony (Aarti) at the River Ganges. The ceremony takes place at the Ghats on the riverside, and hundreds of people turn out to watch and get blessed by the priests. There’s lots of waving fire & smoke and ringing of bells, and more than anything, MOSQUITOES. We were not prepared. They were the hugest flying blood-sucking insects we’ve ever seen, and there were many more mosquitoes than people. If I was a mosquito, I would also spot out the pale tasty travellers, as they did, so to say this was a bit of a distraction is a bit of an understatement. 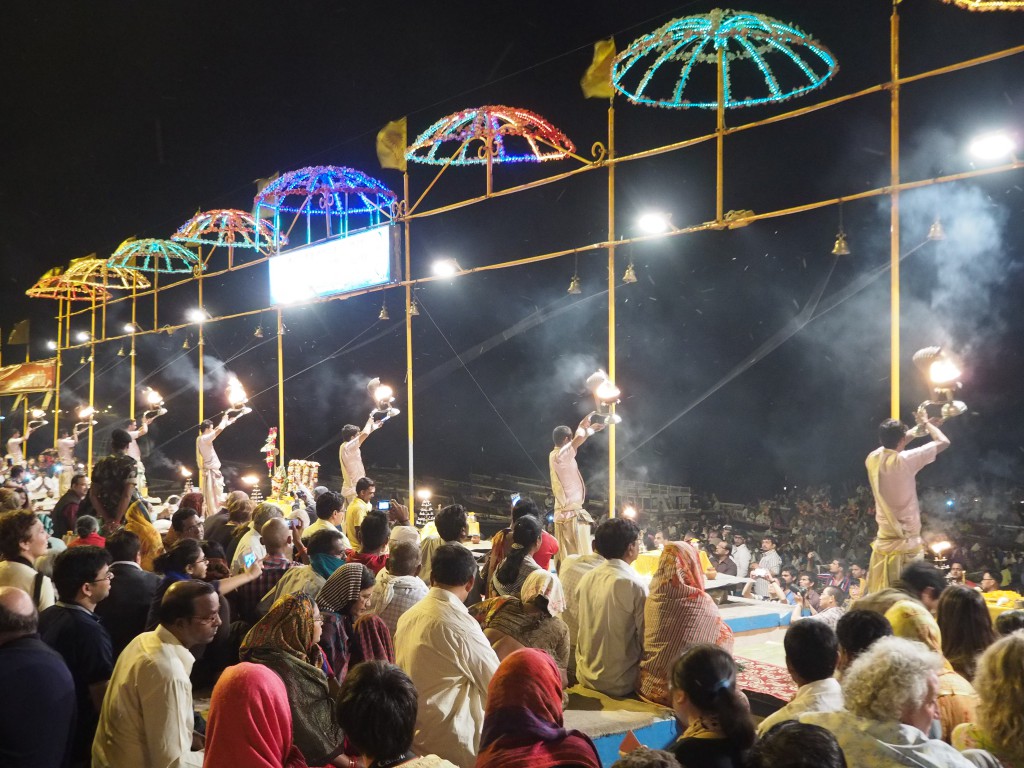 After watching the ceremony and enjoying sleeping inside and away from all flying wildlife, we got up at 5am to go on a boat ride of the Ganges. We saw lots of the different Ghats including the two cremation Ghats where the dead are ceremoniously burned in front of the river for about 24 hours. We then disembarked and made our way through some of the streets to get to the Golden Temple. We had to go through some of the most vigorous security to just see the place as it was right next to a mosque and attacks had happened here before. Only Hindus were allowed inside, and high walls surrounded the temple, so we didn’t get to see much of it at all, which was unfortunate. We then proceeded to the BHU (largest University in Asia) which was an amazingly big campus with a lovely temple too, and then to Sarnath to see where Buddha gave his first sermon. I felt quite humbled by it as I thought Buddha was quite a big deal, but Hats only saw the funny side of my new-found spirituality.

The next day was a free day until our overnight train to Bandhavgarh National Park. We’d read up that Varanasi was a great place to buy an instrument and one of the aims I had for our whole trip was to buy a sitar in India – so we went shopping! Down the intriguing, narrow, cobbled streets behind the Ghats we found various shops selling instruments and tuition. I dragged Hats in to probably 7 places during the day, and we got dragged in to a place by a seemingly genuine guy but actually deviant tout (helping only for good Karma, my arse).  It was towards the evening (after a pizza and the best apple pie Hats had ever had – yes, we’re bad Indian tourists) that we stumbled across a shop down Bengali Tola that had some lovely looking sitars on the wall. This is where we met Ramesh Dey – a sitar teacher selling better-than-touristy-sitars to his students on the side of his tuition business. He was the only seller we came across who could play sitar well himself, and I ended up buying my lovely new addition from him, and he helped with haggling for the shipping too. Let’s hope it arrives back home safely! 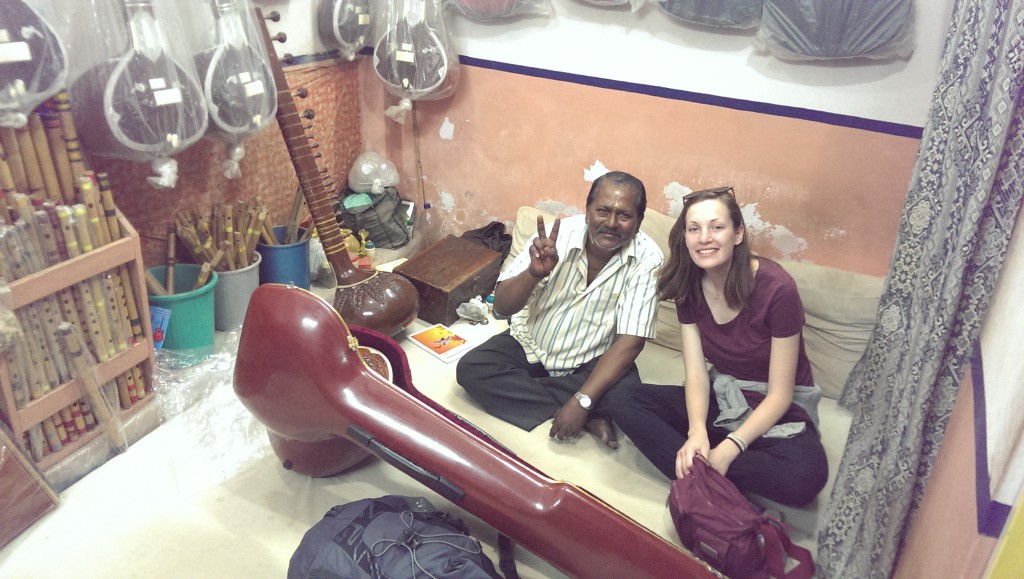 After an extreme rush to buy the sitar, go back to the hotel, pick up our Thanka art, return back to the shop to send the art with the sitar, then back to the hotel for our train, we finally boarded our first sleeper train in India. The guide we met at the airport waited with us for the delayed train and helped us get on at the right platform and the right carriage, which made things really very easy. In AC 2 class, we were pretty comfortable, but the train was delayed by about 3 hours during the night so we woke up prematurely and then got quite bored and restless. We arrived at Bandhavgarh National Park at lunch time, and so did the rain. Our expectations were low for our first evening safari, but the rain turned out not to be too bad and we ended up seeing 4 tigers cross the road in front of us! We were very lucky! The next two safaris were less successful in terms of tigers but we saw plenty of monkeys which kept me very happy. 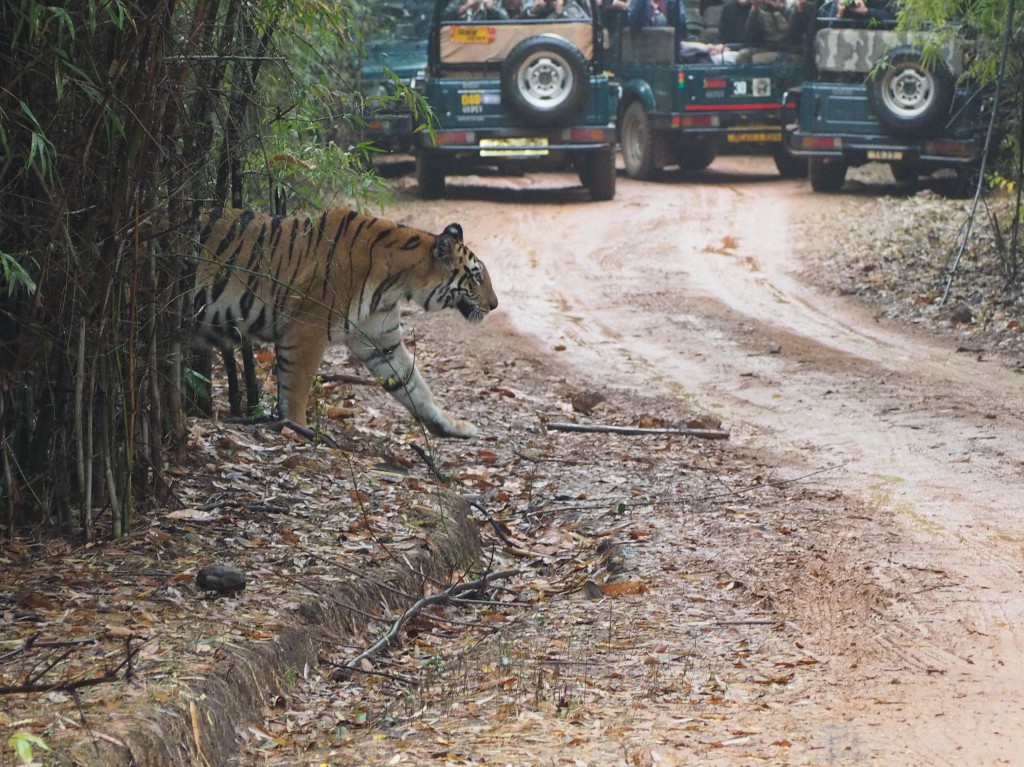 In Bandhavgarh National Park, the mother tiger crossed the road in front of us first before the cubs 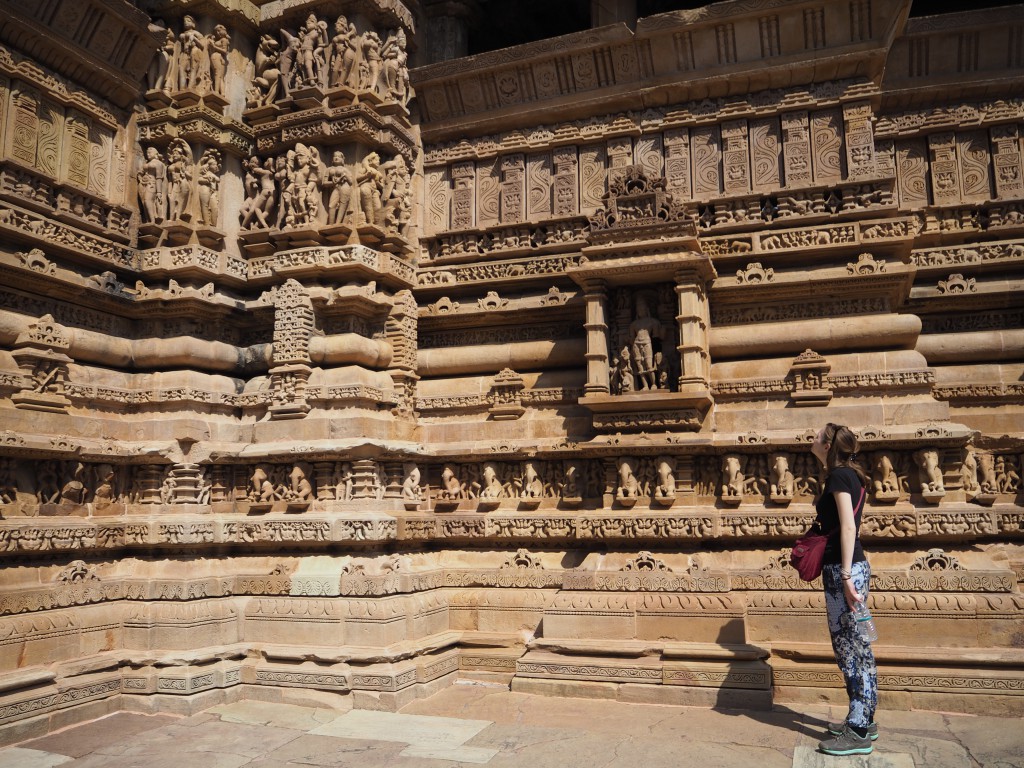 We then made our way to Orchha the next day which was a very small town where we saw a palace and chilled out in our lovely hotel grounds before making our way to Agra for the mighty Taj Mahal. Only we arrived on a Friday so it was closed. Also it was Holi festival all over India which we thought would be really fun but actually turned out to be incredibly limiting. We had been advised by 2 of our guides (including the one in Agra) not to go out of the hotel for Hats’ safety as a woman. Not a ringing endorsement of India to be honest. Everyone was drinking from early in the morning, and there were seemingly no women about really taking part, and although it looked fun, we probably made the right call.We got to see Agra Fort and the Baby Taj though in the afternoon with our guide and driver. Our guide seemed to know everyone (he’d been in the job for something like 23 years) and we somehow managed to get in to the hall of mirrors where no other tourists were allowed. It was amazing! The guy who got us in lit some candles and showed us just how special this room was. 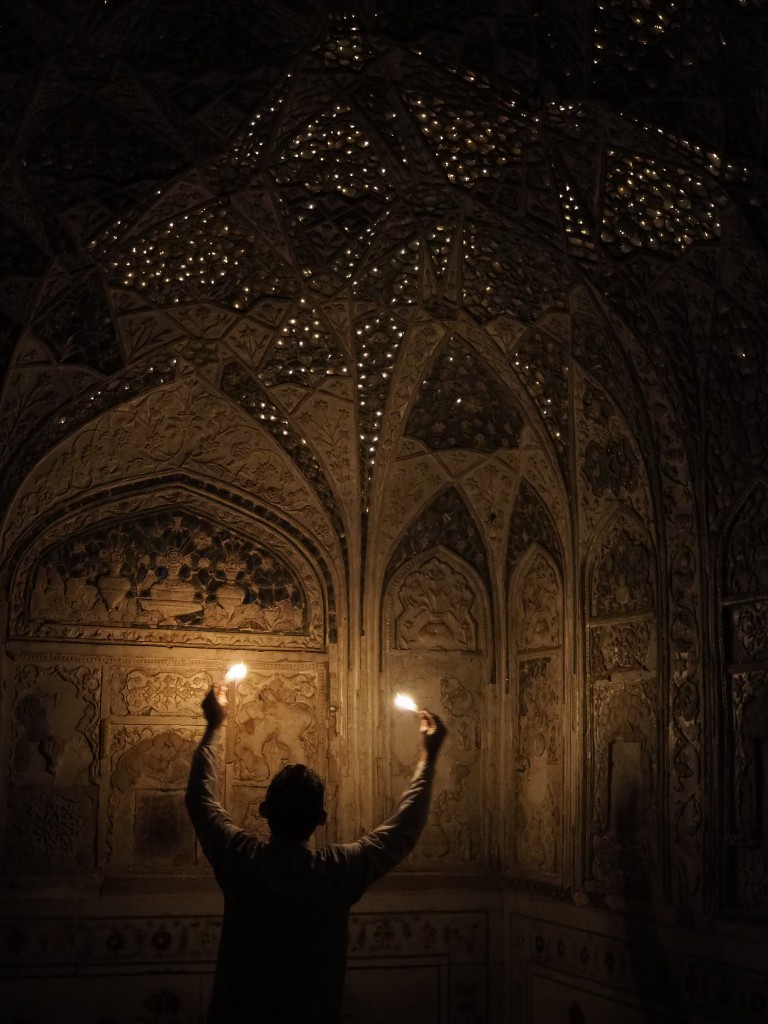 The amazing hall of mirrors in Agra Fort.

The next morning we woke up really early to get in the queue for the Taj Mahal and we managed to get second in line! But our guide didn’t turn up…so hundreds of people flooded in while we had to wait embarrassingly at the side. He eventually turned up though blaming motorcycle problems, and we took our tour around one of the 7 wonders of the world, albeit as a quasi-photoshoot as our guide fancied himself as somewhat of a photographer. 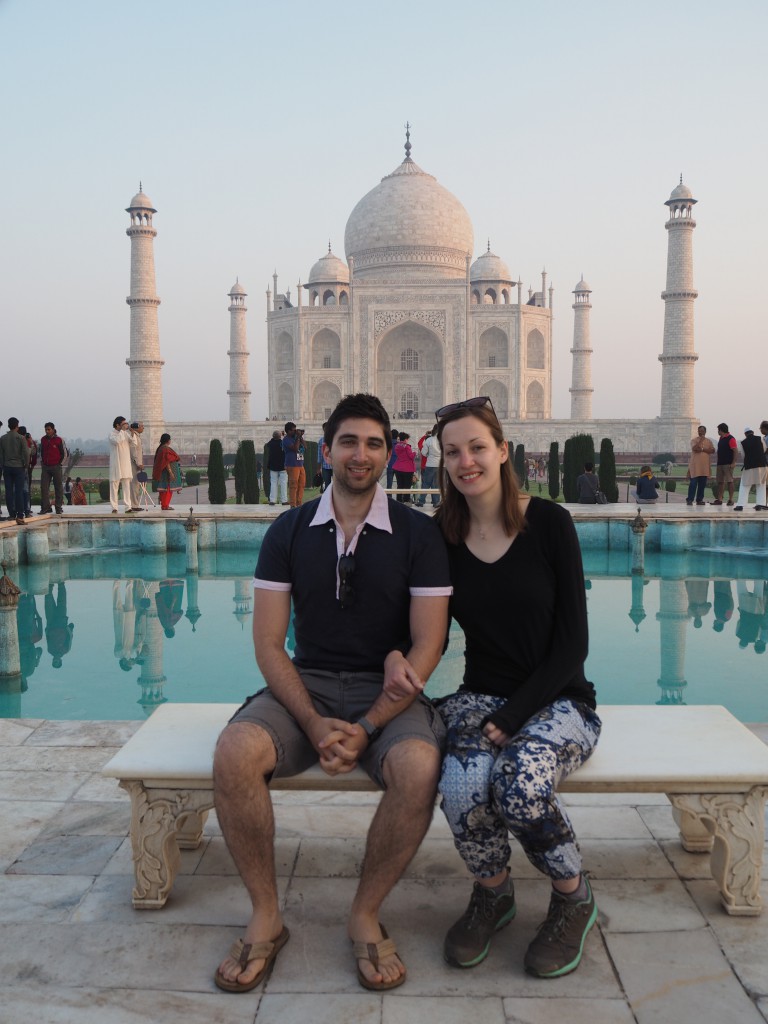 At the Taj Mahal on the famous bench

Straight after the Taj Mahal, we drove to Ranthambore National Park, where we had our final safari in India. This time it was a canter (20 person jeep) safari and we were on board with some of the noisiest Indian families so we weren’t surprised not to see a tiger. However we did see an amazingly cute baby owl sleeping and a load of birds kept landing on us looking for food. 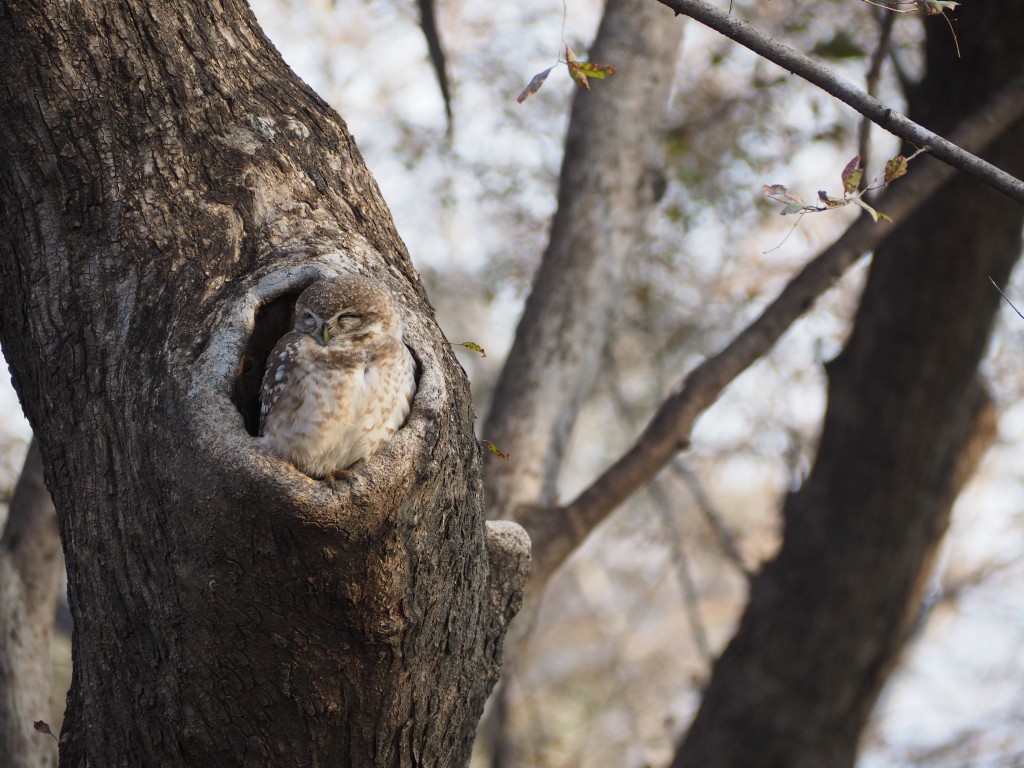 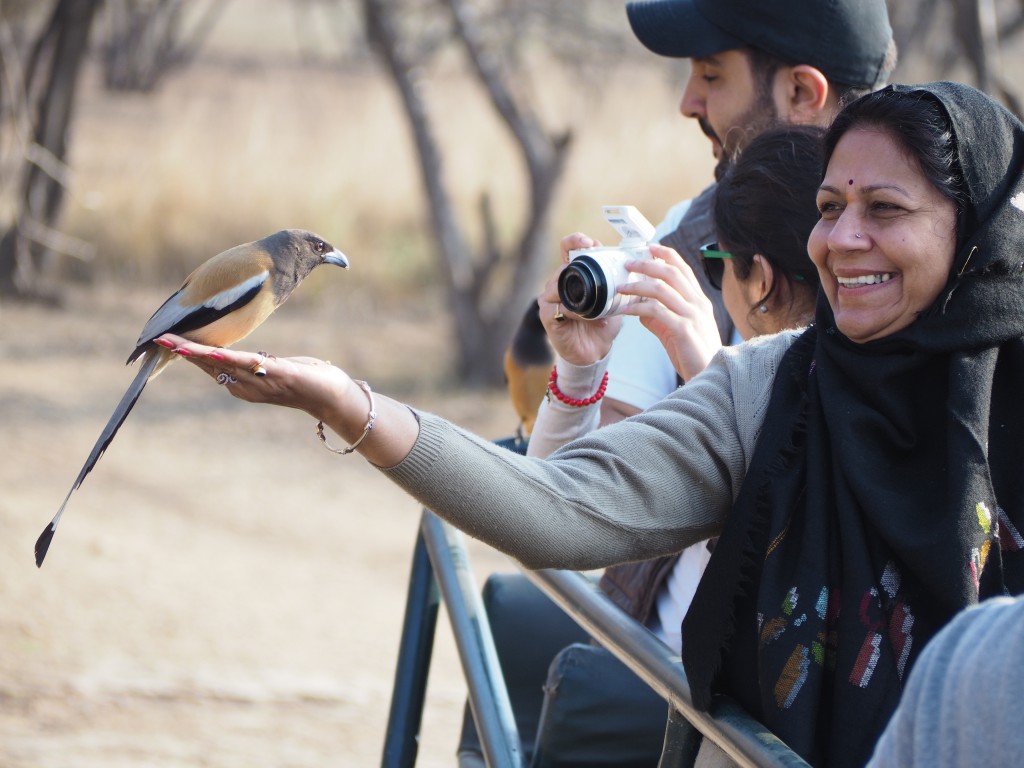 These birds were landing on everyone looking for food in Ranthambore

From Ranthambore we travelled to Jaipur for the last bit of the organised tour. We were expecting to love the Pink City, and the elephant ride to the Amber Fort, Janter Mantar (big observatory) and the bustling bazaars were all great, but the city itself was a bit underwhelming. Maybe it didn’t help that our guide was a bit rubbish and we were pretty sick of our driver trying to take us to shops and talking about us in Hindi-English. 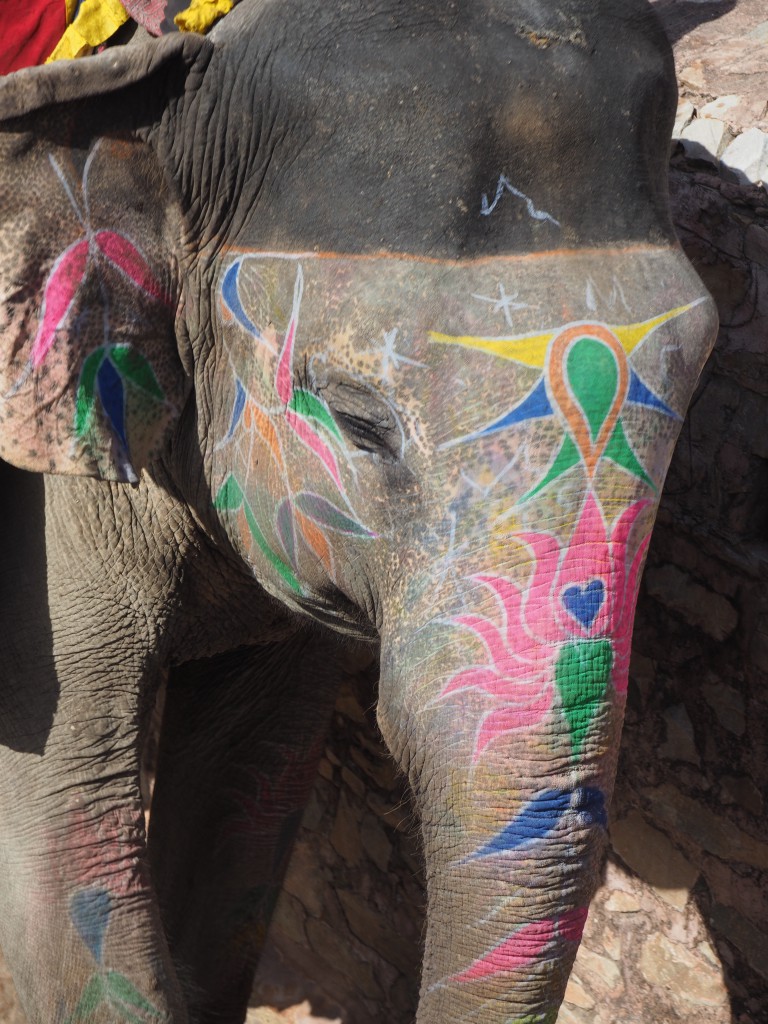 The view from the top of the Amber Fort in Jaipur. You can see the elephants making the journey up and down!

Our tour ended with us travelling to Delhi to meet some of my family which I’ll cover in the next part.

P.S. So why “service not included” as a title for this section? ‘Cause we started to get really tired of the tipping culture and the constant taking advantage of foreign tourists in these first 2 weeks. I even had one waiter come up to me at a highway service station and remind me that service wasn’t included after I’d paid and taken the change. I smiled, thanked him and certainly did not give him a tip for delivering me a small cup of more-expensive-than-back-at-home hot water + tea bag. People seemed to always expect a tip from us, and it seemed like 9 times out of 10 they didn’t even appreciate what we gave them. But oh well, I shouldn’t complain too much – it is still cheaper here than a lot of places around the world!