We arrived in Auckland, and before we’d even seen the city, we were a bit gutted. It wasn’t Auckland’s (or New Zealand’s) fault, we hadn’t even got out of the airport to explore yet. It was that we’d just left India – bustling, crazy, colourful and sometimes stressful-but-in-an-exciting-way India. We’d ended it on a high by getting to know some of my lovely extended family and leaving them was sad on its own. Even though I’d championed New Zealand in the run-up to our trip when we were deciding where to go in the world, I’d now decided it couldn’t possibly be half as exciting as where we’d already been. It turns out we couldn’t have been more wrong!

We were shattered when we got in to our accommodation – not only was it 1am local time, but we’d just flown about 14 hours, mixing up our time-zones and body clocks in a big way. One positive is that we flew with Malaysian Airlines – yes, it’s had negative press recently for understandable reasons, and yes, we thought about changing airlines before we left the UK, but we actually had the most comfortable flight! And coming from Hats, who doesn’t like flying, that’s a big thing. The other positive was that our accommodation was amazing – not just amazing on a scale of 1 to India, but on a normal scale it was pretty plush. We’d booked ourselves a small studio apartment for the same price as a hotel, and we were gleaming with our hotel win. 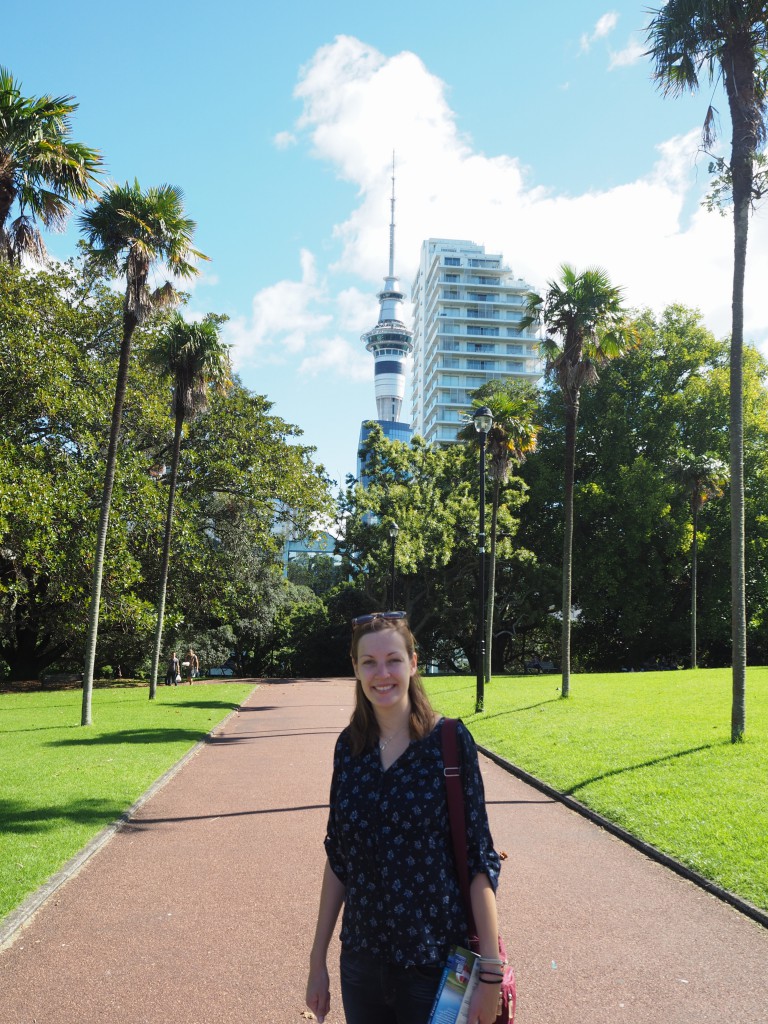 After copious sleep, we decided that we’d have a day of ‘normal’ after India, so we booked to go the cinema that evening (Kingsman was exactly what we needed it turned out). Enjoying our local surroundings for the next few days, we started to ‘get’ New Zealand. For example, we went up the Sky Tower (impossible to miss) to get an amazing view of the city – watching the city turn from beautiful blue skies to just the lights of the city. From up there, we realised how big Auckland was, including all the islands (who knew Auckland had islands?). And after reading about the different volcanic regions in Auckland, we decided to go to Rangitoto Island and do some walking on the igneous rock trail up to the summit to get some views of the city.

Inside the Sky Tower overlooking the whole of Auckland 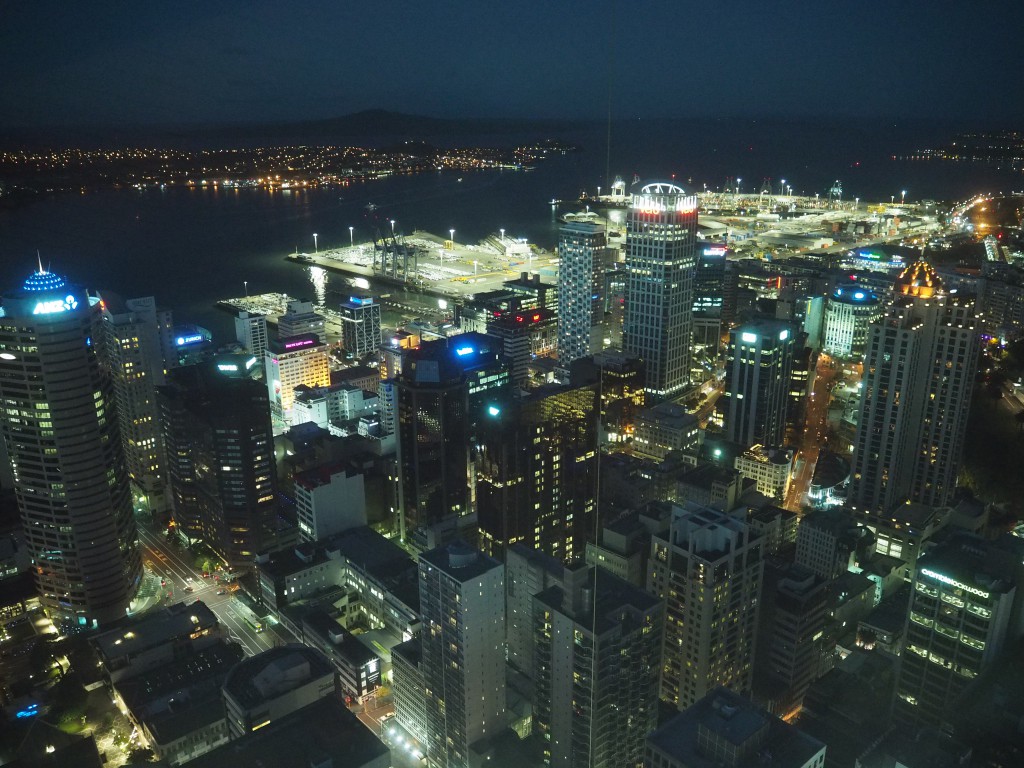 Auckland at night from the Sky Tower

People give Auckland a bad rep, but we actually quite enjoyed it. We topped off the experience of the big city by picking up our companion for the next month – our unashamedly-normal-but-trying-to-look-sporty Mazda Demio (‘Mazda 2’ back in the UK) – which we later nicknamed Speed Demon.

It was our first automatic car we’d driven, but after getting a feel for it, Hat drove us to Whangarei on our first day on the road, via Pak’n’Save (the supermarket we grew to adore in NZ) to pick up supplies for the following days. What people didn’t tell us before is that your car ends up being an amazing place to store things, so in no time our car was full of bags and food. 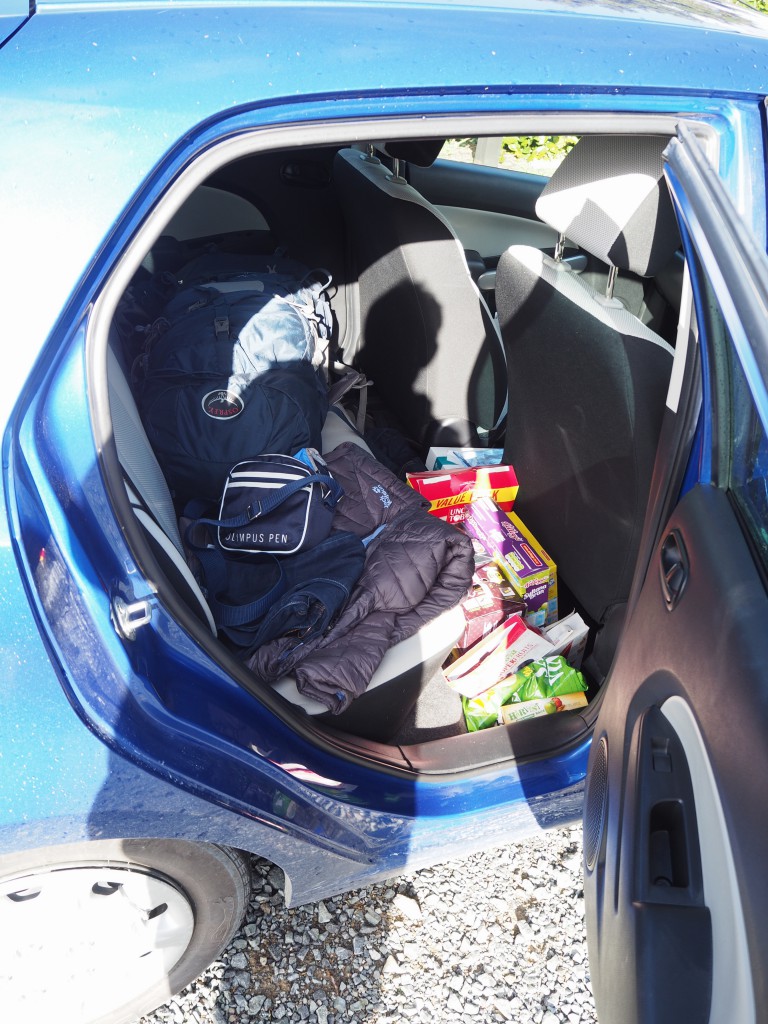 Our car was the best cupboard ever.

The highlight at Whangerei is the Abbey Caves, known for glow worms. So after getting kitted out with a silly amount of gear courtesy of our hostel, we headed there, bumping into a couple of German travellers on the way who were noticeably not wearing hard hats and cave clogs. We headed in to the caves as a four, and enjoyed seeing the glow worms all around, if getting a little distracted by the giant eels in the water (we noticed them once one swam at Hat). 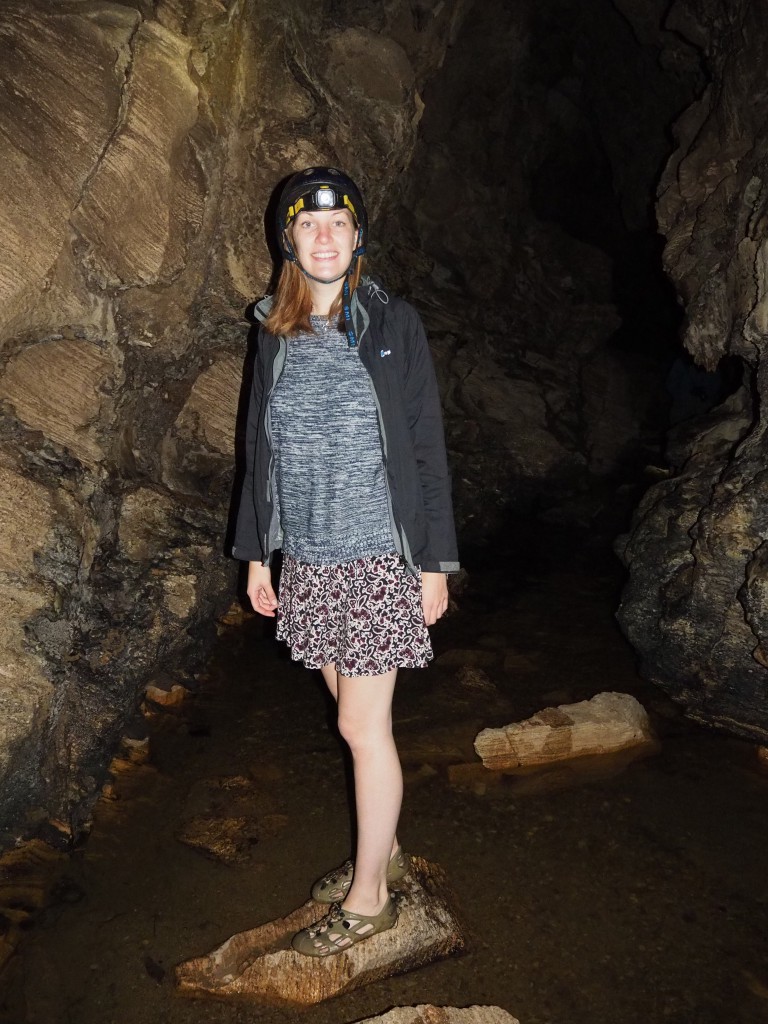 Hats in the Abbey Caves, complete with hard hat, light and cave clogs

After returning the kit to the hostel, we took a short trip to Whangarei Falls to see what was to become one-of-many waterfalls in New Zealand, and stopped off at our first beach (Matapouri Bay), which was completely deserted, only to see a sting ray near shore in the crystal clear water! It followed us up the beach for a while and I resisted the urge to jump in the water to play with it. 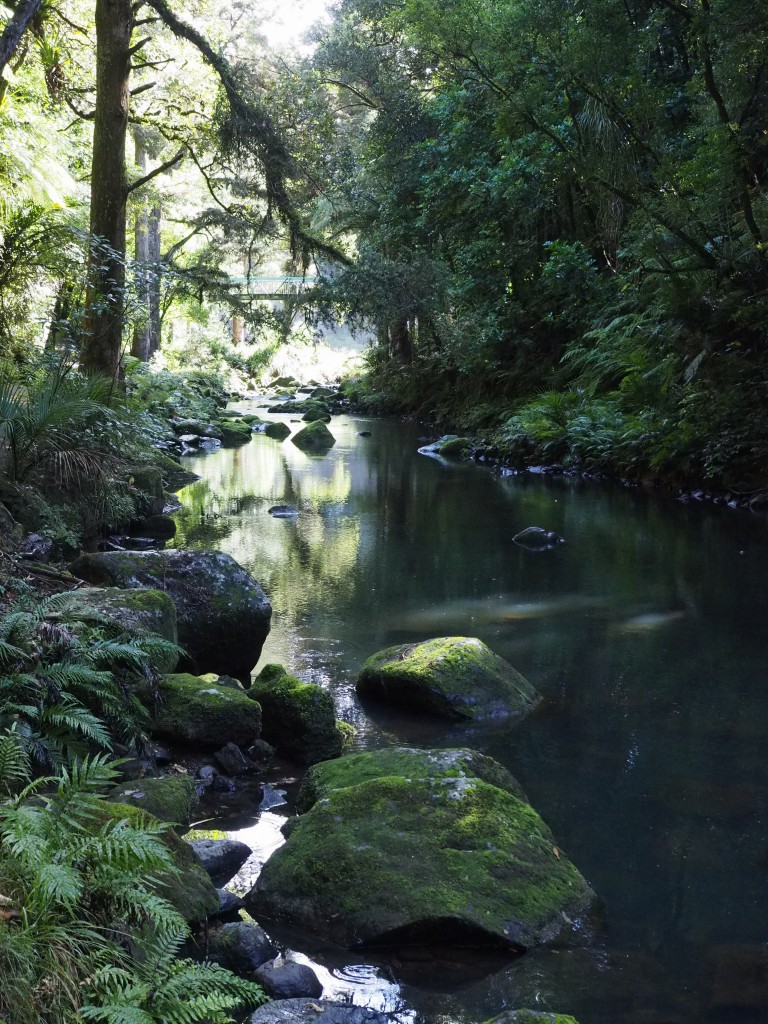 The forest leading up to Whangerei Falls 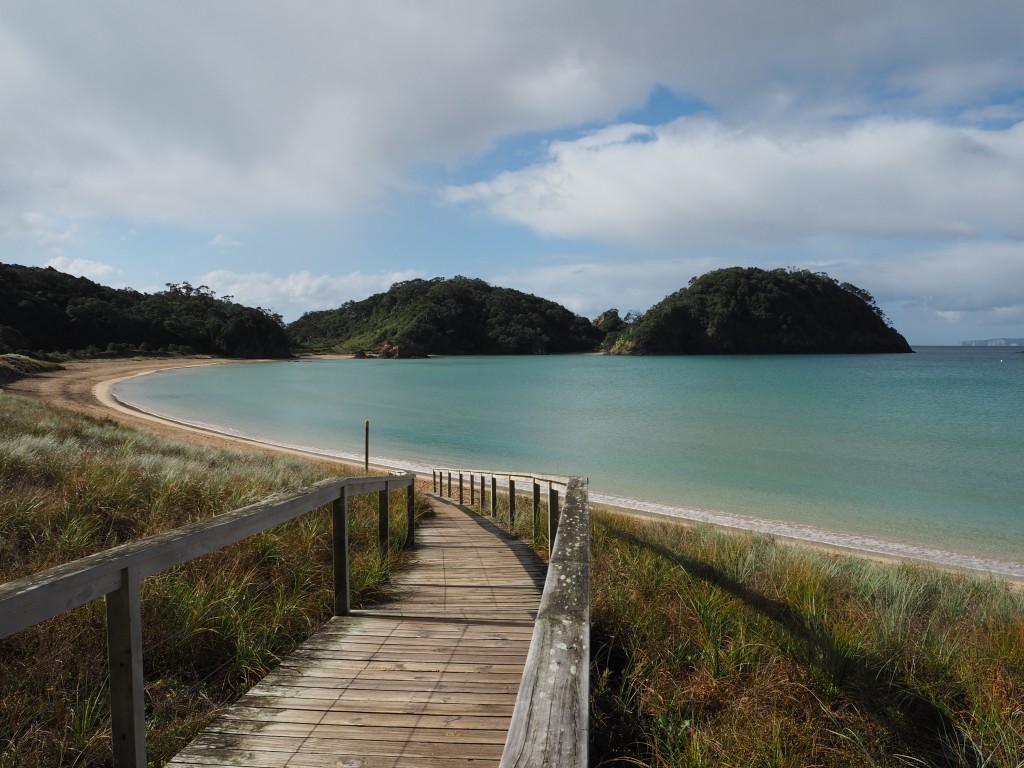 Our next stop was Paihia, a base for the Bay of Islands. We’d heard this was a great place to try and swim with wild dolphins, so we booked on to a tour when we arrived. Reading all the small print, it’s actually not too likely you’ll be able to swim with the dolphins as there are certain preconditions for human interaction (they must not have a baby nearby, they must be interested, etc), but we were massively successful and managed to get in the water with so many playful dolphins! My GoPro came in handy… 🙂 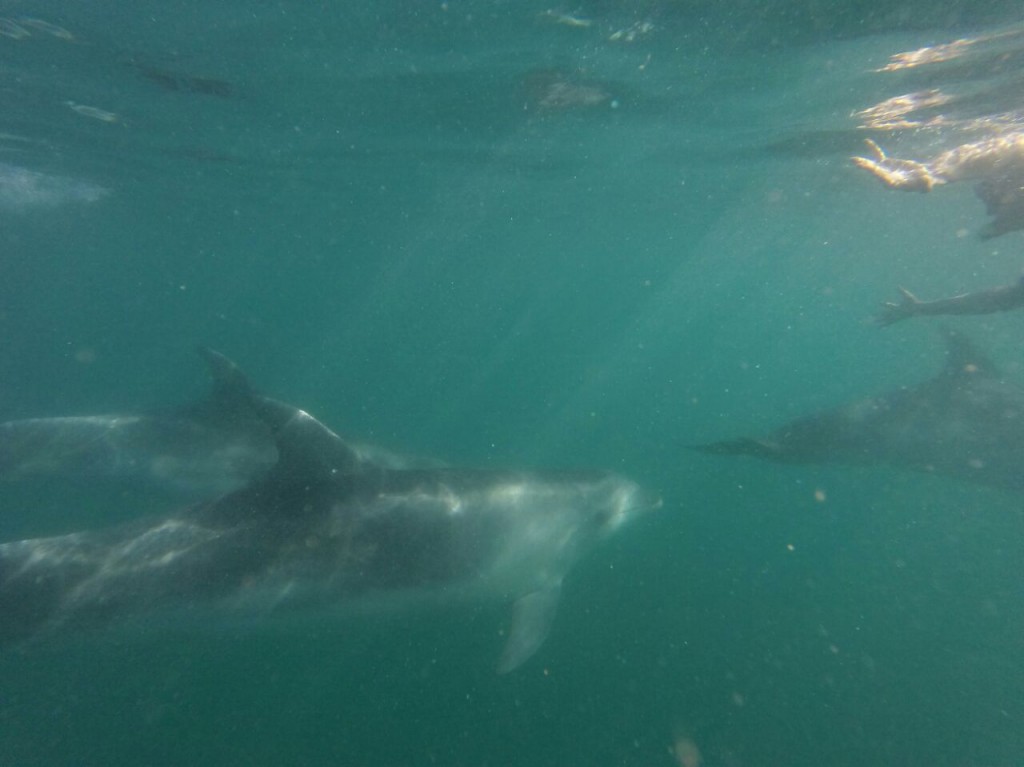 Swimming with wild dolphins at the Bay of Islands!

There was one point in the water, when I swam off to see more dolphins on my own, that I realised these are BIG fish. When I was surrounded by 4 of them, away from the other group of snorkellists, I had one of those moments when I thought these could easily be sharks and/or hostile. But they continued to be interested in me and us in general, hearing them chattering away under water even if I couldn’t see one near. Hat was of course over the moon that she had ticked one of her life goals! 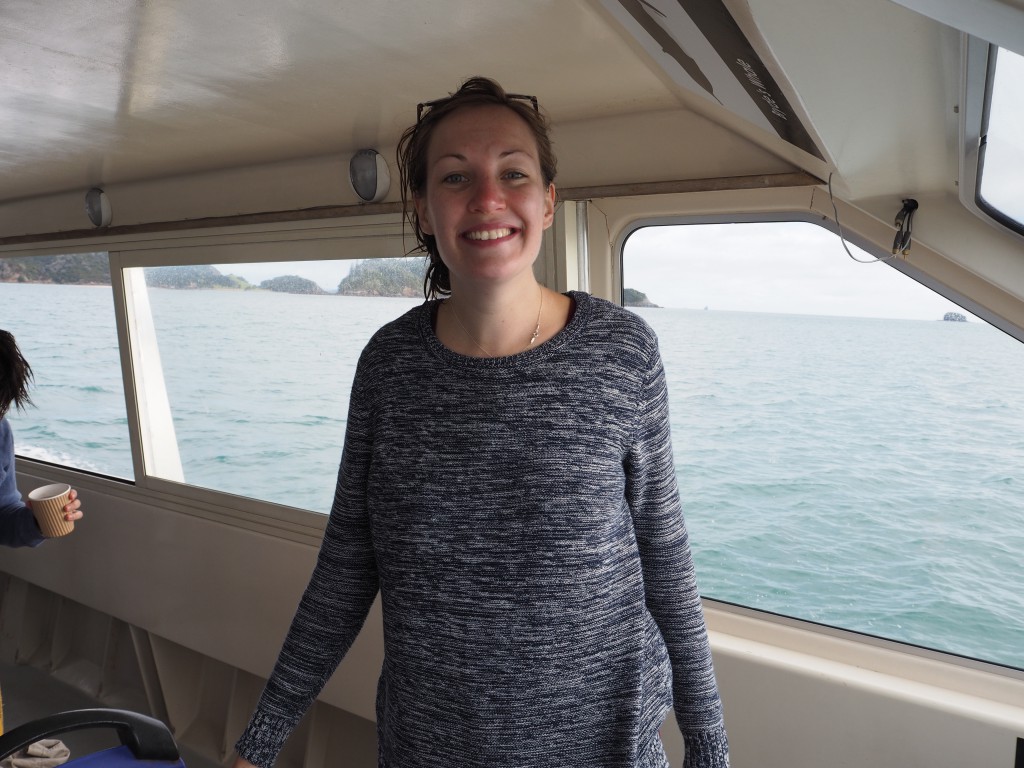 What better way to finish a day as to do something completely different and cultural, so we visited the Waitangi treaty grounds nearby – probably the most historic site in New Zealand, where the Maori tribal leaders signed the land-sharing [sic] agreement with the British Empire. We learnt about the history behind the agreement and the repercussions of it, and enjoyed a traditional Maori welcome. Although a tiny bit gimmicky at times, on the most part we thoroughly enjoyed it and would highly recommend it to anyone who doesn’t know much about New Zealand history or the Maori. 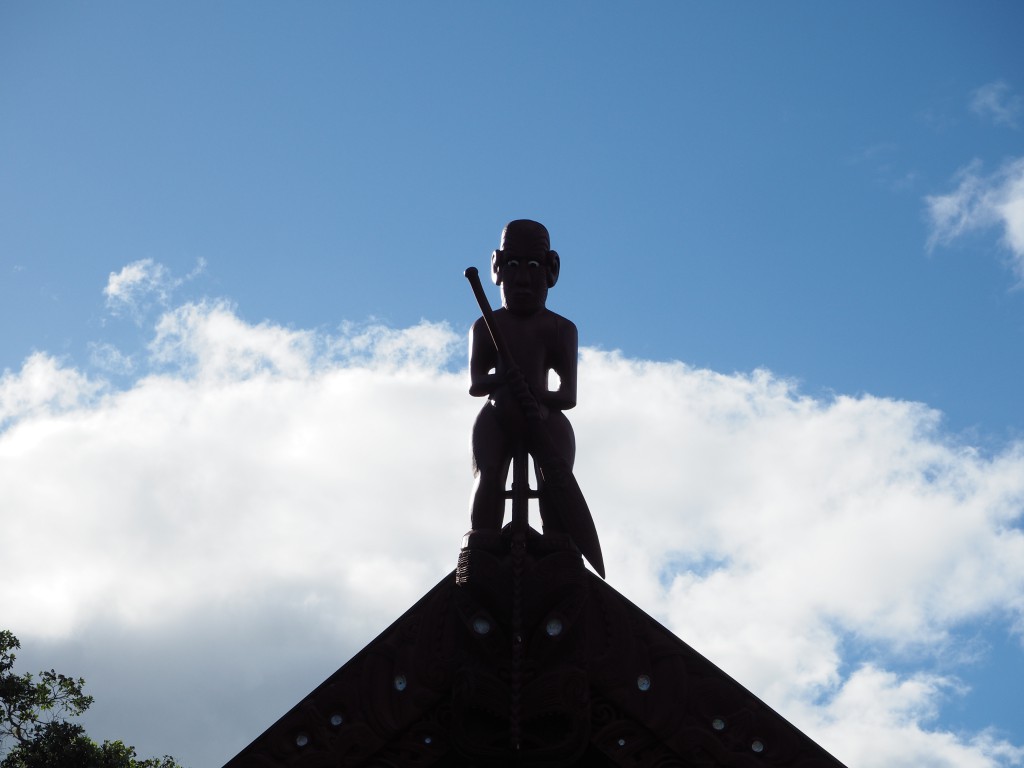 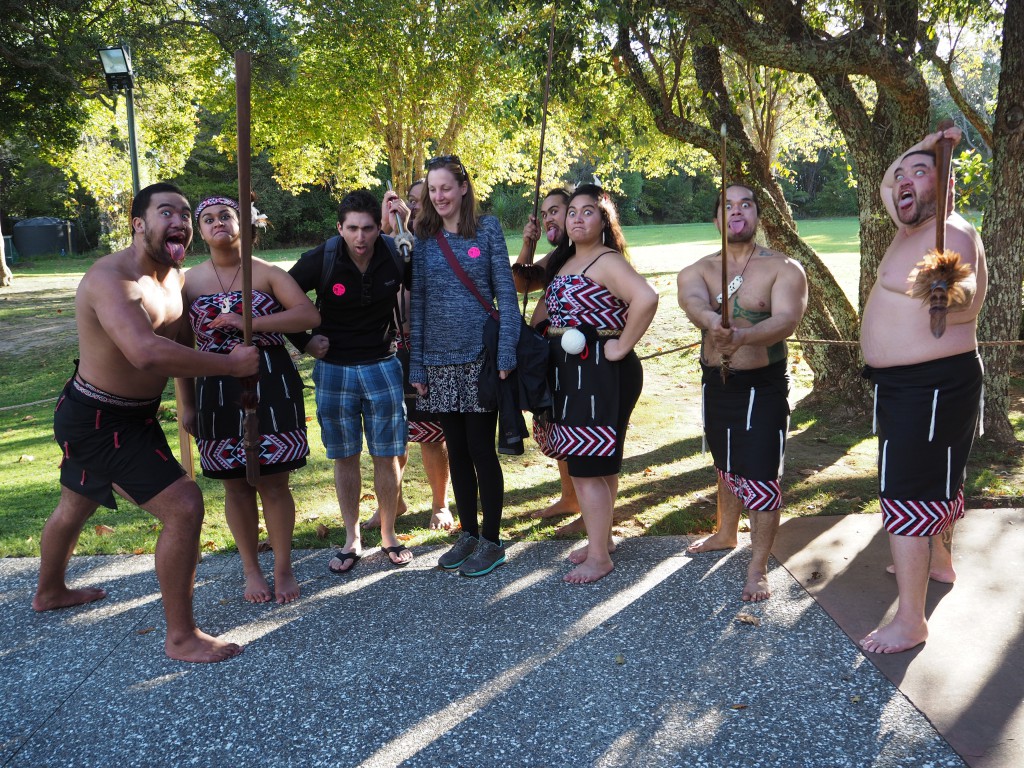 A picture with the Maori involved in the cultural performance. They told me “scary face!”. I tried…

At this point I feel like I haven’t mentioned Speed Demon much. We LOVED our car. And one of the main enjoyments of NZ for me especially was the driving – it was unbelievable! Not only did we get to drive along some of the most picturesque places we’ve ever seen, but I got the enjoy the windy, quiet mountain roads often with big birds of prey flying fairly low above us. After Waitangi was probably one of the longest driving days in New Zealand with a long drive to Cape Reinga (northern peak of the North Island) and then down to Ahipara, where we could access the 90 Mile Beach. 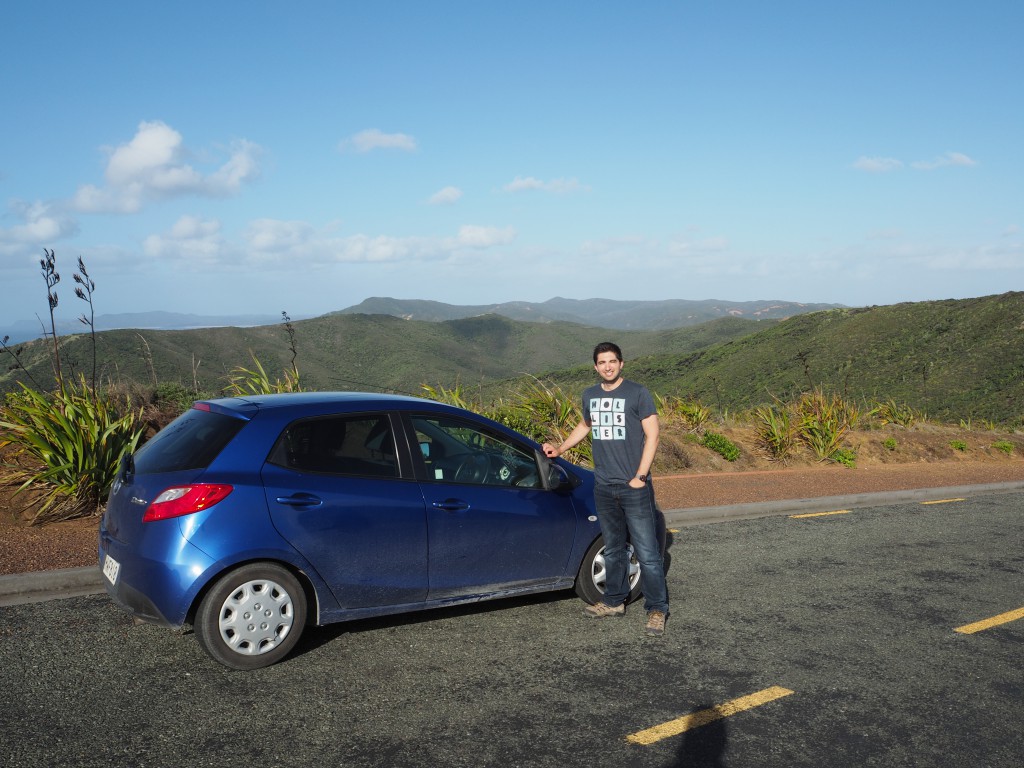 Me and Speed Demon at Cape Reinga 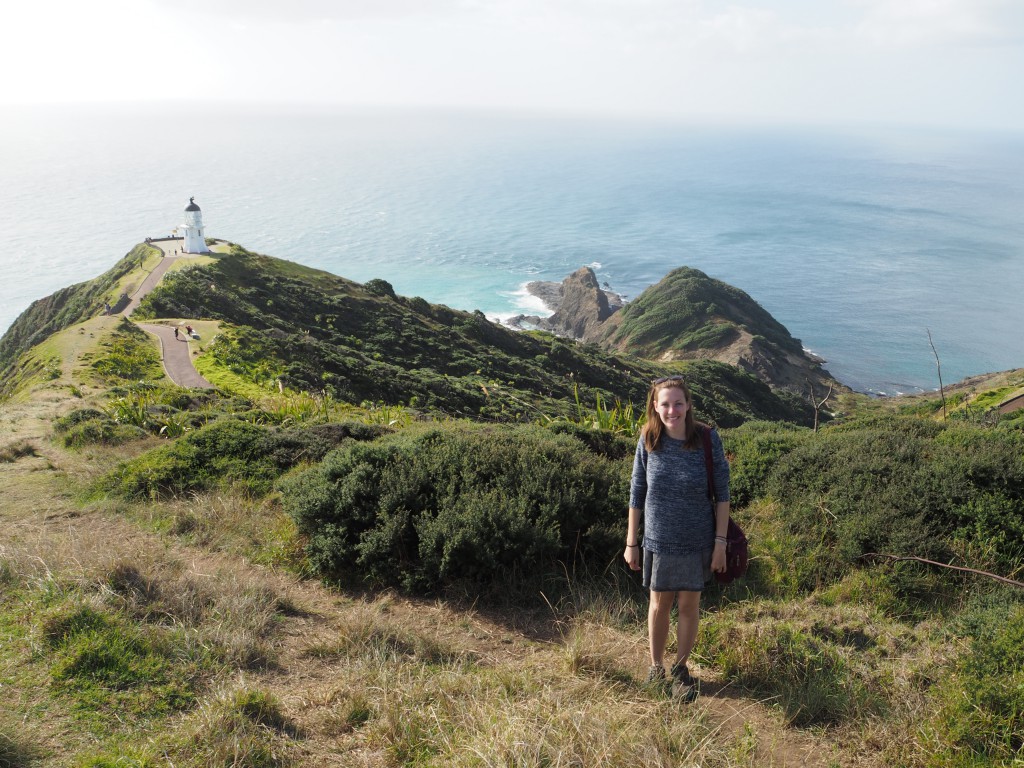 Hats with the lighthouse of Cape Reinga in the distance

When we walked across the 90 Mile Beach it started to turn into a bit of a graveyard for baby stingrays, which although fascinating when I came across the first skeleton, became pretty miserable when we stumbled in to so many of them. We’ve still never worked out why there were so many of them. 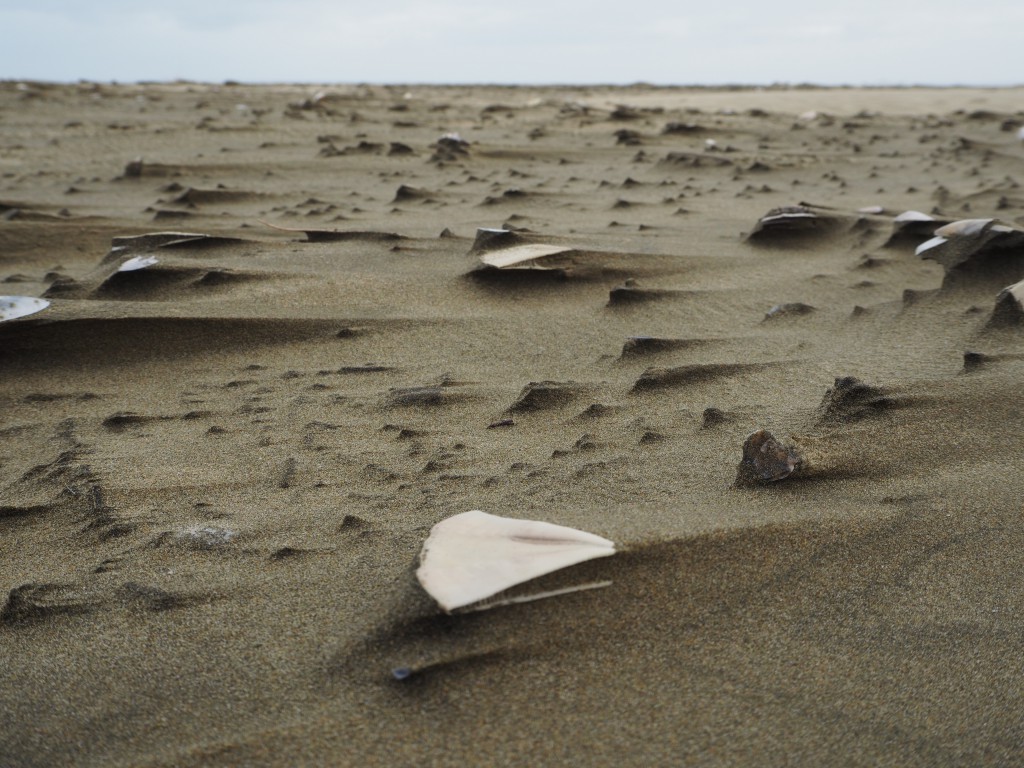 We did another long drive (6.5 hours) to Raglan after a recommendation on the dolphin boat from another traveller, but it was really disappointing. Not only was it really bad weather, but also one of those surfer towns that reminded us of the second Inbetweeners movie, including a guy playing the guitar and singing badly in lounge (next to our room at night…) with fellow traveller girls applauding and cheering. If it wasn’t tragically funny, it would have just been the worst. What got us through was our love of Tim Tams (incredibly Aussie versions of penguins, which are incredible. Seriously).

Leaving pretty quickly the next morning we headed to Taupo, known for it’s rainbow trout and the famous Tongariro Alpine Crossing – a 19.4km trek of an amazing mountain range, including passing Mt. Doom of Lord Of The Rings fame (actually called Mt. Ngauruhoe) and the Emerald Lake (which was incredibly green). It was on this trek we met Kat and Toby, a fellow couple from England, and we completed the trek in about 6 hours with no problems apart from our views from the top (and some of the most interesting bits) being obstructed by thick cloud. 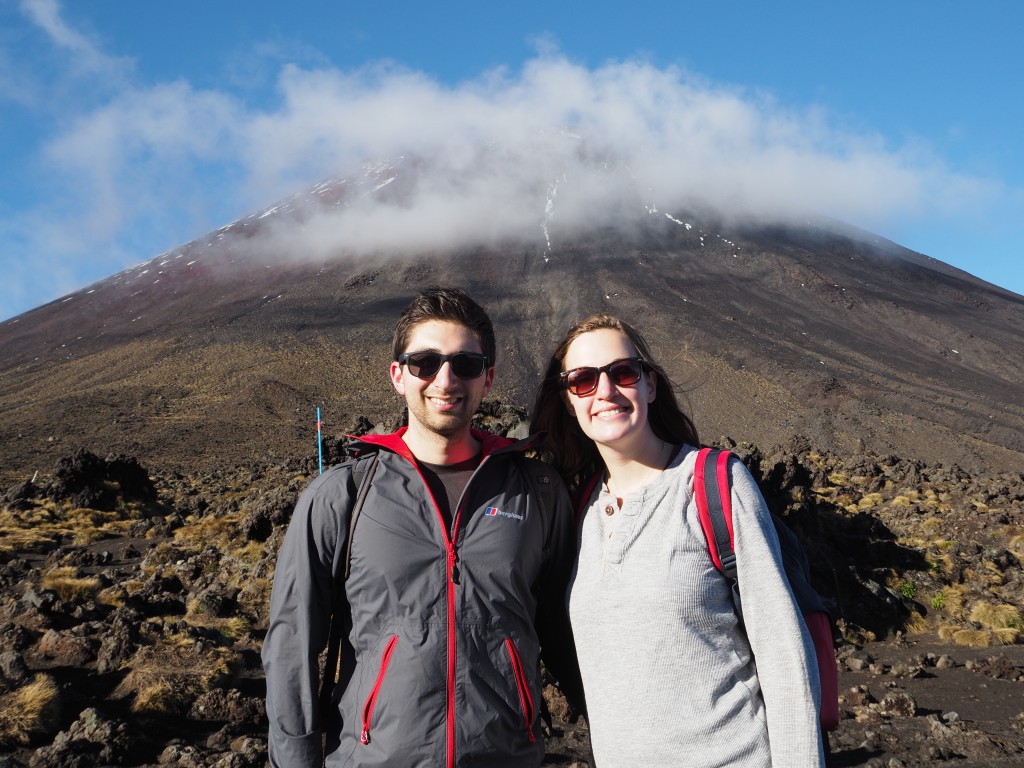 Me and Hats with Mt Doom in the background 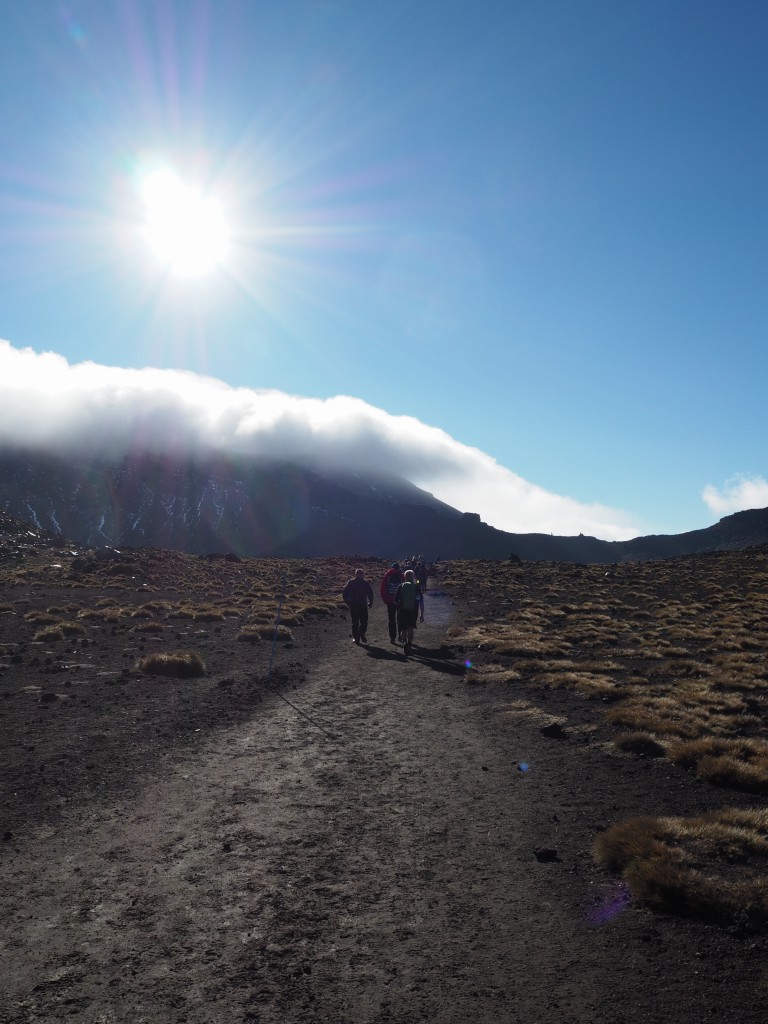 On the way through the Tongariro Crossing 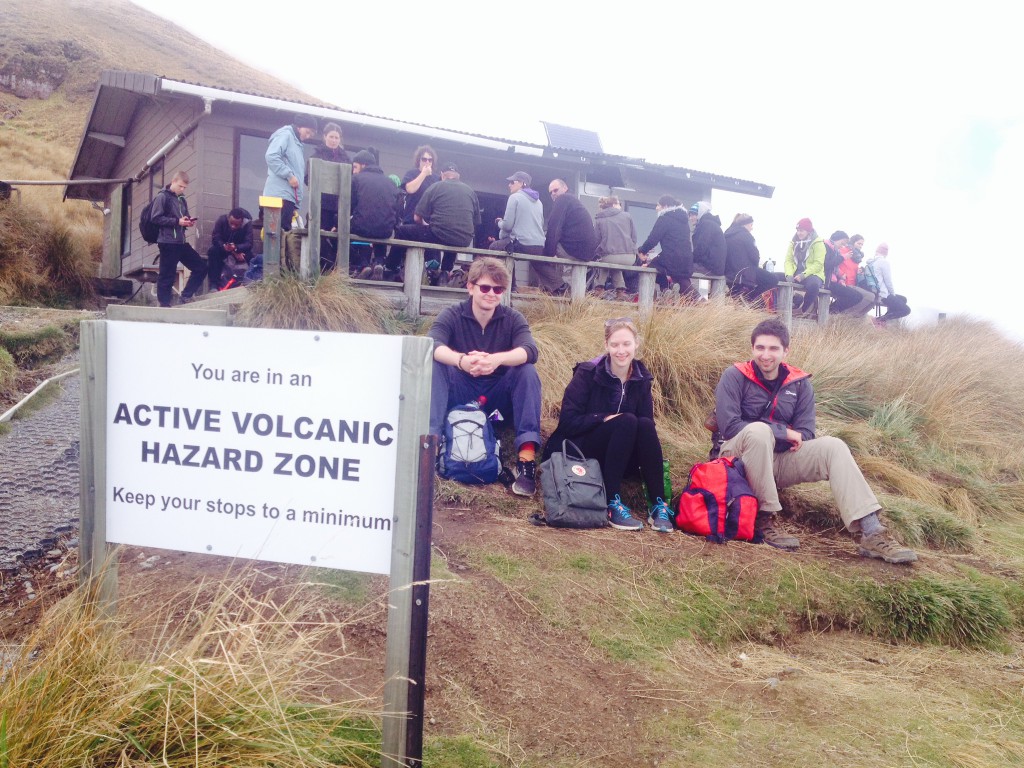 Egg-smelling Rotorua was our next stop, which stank of sulphur due to it’s volcanic credentials. We only stopped at Te Puia, a quasi-museum in the town which again covered Maori culture and handicraft as well as encompassing some of the most interesting volcanic activity – with magnificent, exploding geysers and mud pools. It’s also the place I realised I loved Maori woodwork and ended up buying Maori Bob…I hope he gets home undamaged! 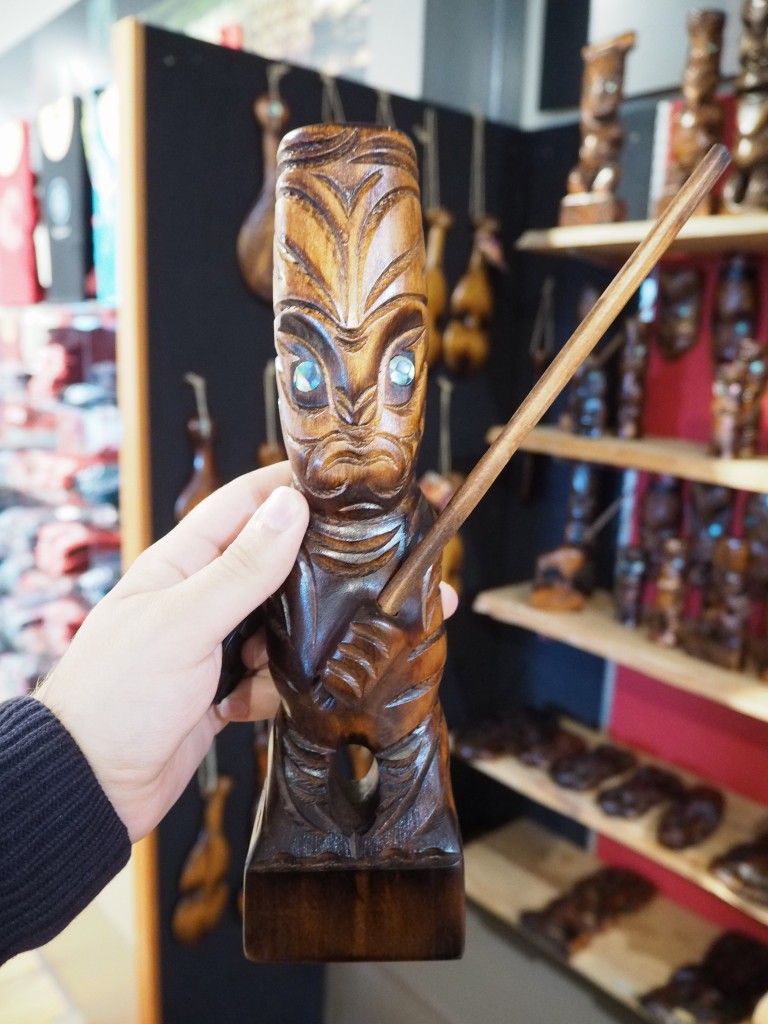 Maori Bob! Carried him around for about 6 weeks after buying him and sent him home with a friend. Hope he’s still in one piece!

And that was basically it for the first island of New Zealand! Our last stop on the north island was Wellington, the political capital of NZ, where we visited the botanical gardens, the Museum of New Zealand (Te Papa Tongarewa) and had some delicious food before we got the ferry over to Picton. On to the South Island! 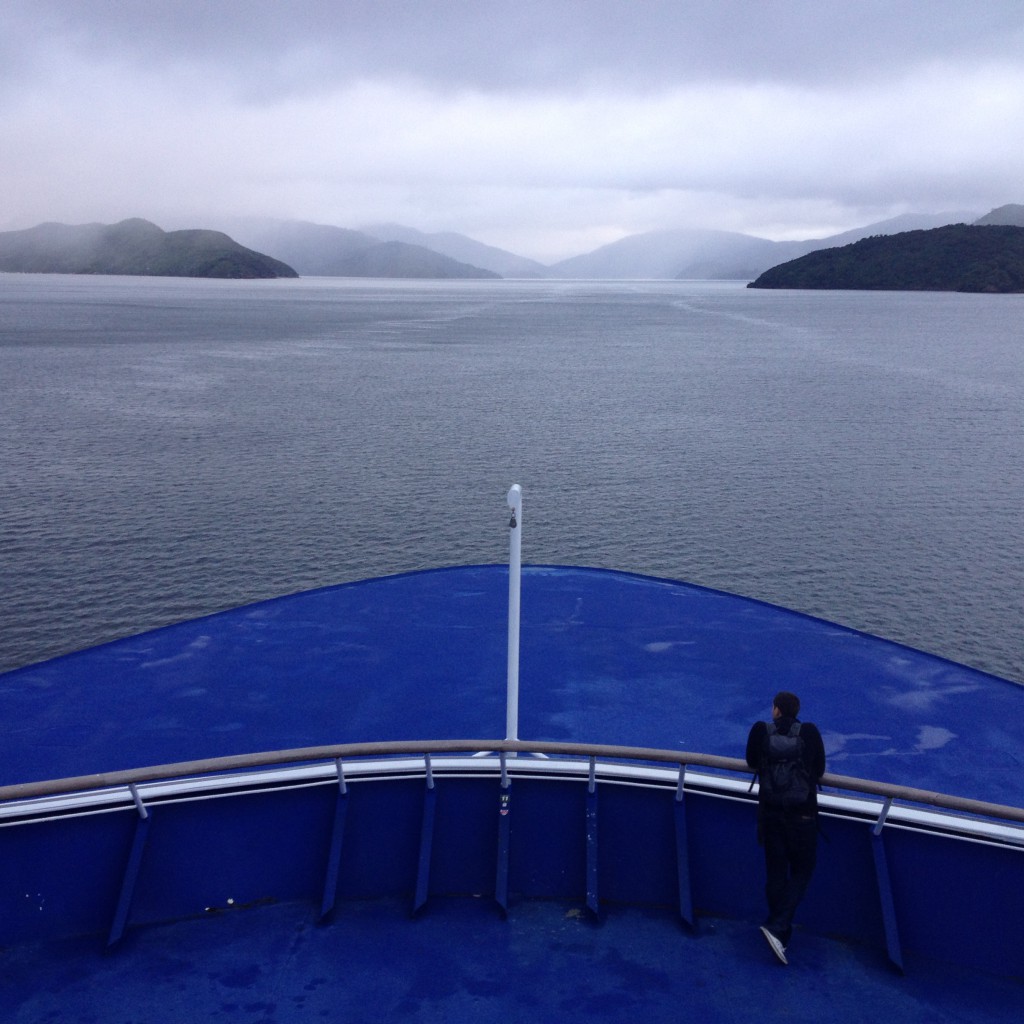 This could only be New Zealand…on to the South Island!